Leeds United attacker Brenden Aaronson has admitted that he has been trying to adapt to the physicality of the Premier League and working on his game accordingly.

Aaronson was signed in the summer from RB Salzburg for around £25m after 18 months in Austria.

He made 66 appearances for the club in all competitions, scoring 13 goals and assisting a further 15.

The 5ft 8in American also made eight appearances in the Champions League for Salzburg, but he has confessed that he has had to make changes to contend with the demands of the English game.

Speaking on the Men In Blazers podcast, he said:

“Physically, I feel like I’m putting out so much every game. Getting beat up a little bit, those kinds of things.

“It’s definitely tough, but it’s something that I’m learning and I’m going to continue to get better and better at.

“A big theme of mine this year was Jesse would tell me was I need to take more fouls, because sometimes I would try to run through fouls than just falling down.

“That’s been something I’ve been trying to work on, sometimes my acting might not be that good but I’m trying to add that to my game and set pieces.”

Has Aaronson impressed you so far at Leeds? 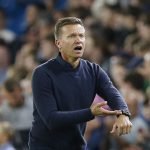 The New Jersey native has played a key role in the Whites’ campaign so far during his maiden season.

He has started all 12 of the side’s Premier League games and is Jesse Marsch’s fourth-best performing player in the division with a 6.76 WhoScored rating.

While he may feel that he needs to work on this particular area of his game, he actually tops the Leeds charts for fouls drawn per 90 minutes.

He also leads the way with 1.6 dribbles per 90, but by the same token, he has been dispossessed considerably more times (3) than anyone else at the club.

Nonetheless, it is encouraging to see the 22-year-old seeking to rectify his weaknesses and it can only make him a better player.