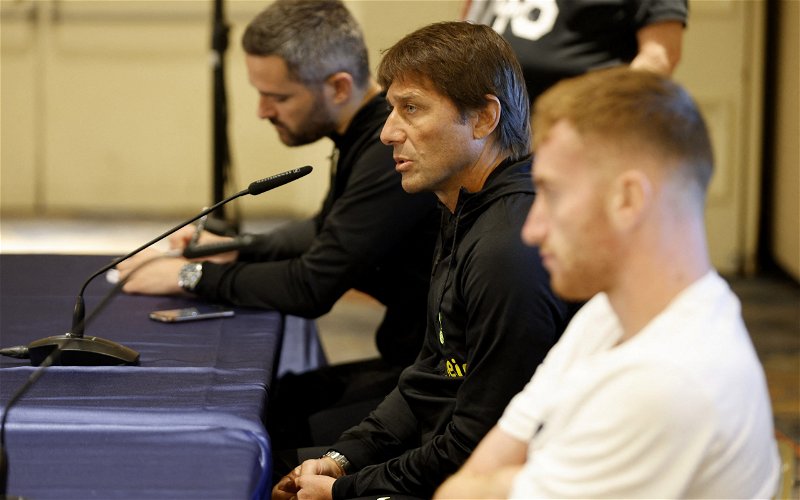 Tottenham Hotspur manager Antonio Conte has a dilemma with who will start the first Premier League game of the season in his defence.

That is according to Dean Jones who was speaking to This is Futbol about Spurs’ summer transfer window so far.

The Lilywhites have welcomed three new defensive additions this summer, with France centre-back Clément Lenglet signing from Barcelona, whilst wing-backs Djed Spence and Ivan Perišic have signed from Middlesbrough and Inter Milan respectively.

Conte is thought to favour his traditional three centre-back system for the squad this season, and now has a number of options to choose from within his squad.

And Jones believes that the Italian manager has a dilemma on his hands as to who to pick for the opening game of the season this weekend.

“I think Lenglet has got a strong chance [of starting as a left-sided centre-back].

“I know [Davinson] Sanchez has been used there too and he actually looked pretty good, but I think they would like Lenglet to be ready.

“Same with [Matt] Doherty at right-back.

“It’s a difficult one because I don’t think either of those players or Perišic are actually at the stage that Tottenham would have hoped right now, and they will be the three that end up nailing down those spots.

“At the moment, it’s a bit of a race for all of them to be ready for that first game of the season.

“I’d edge with giving a start to Doherty and Lenglet, but they’ve still both got a bit to prove.”

Whilst Spurs fans may be disappointed to hear that not all of Conte’s defensive options are 100% match-fit this close to the start of the Premier League season, we believe that the club’s supporters will be happy to hear that he has a multitude of options he can pick.

And we agree with Jones and believe that of all the options in the Spurs squad at the moment, Matt Doherty, Lenglet, and Perišic are probably best placed to start on the opening day of the season.

However, we believe with a domestic and Champions League campaign to balance for at least the first-half of the season, we think that players like Spence and Sanchez will be given a fair run in the team, in the run-up to the World Cup.