The Hammers only missed out on qualifying for the Europa League last season by two points after a run of just one win from their last seven league games as they focused on winning the tournament – something that also failed to come to fruition.

West Ham will therefore turn out in the Europa Conference League this upcoming campaign, which is something that will likely not be as exciting for an England international such as Rice. However, with a £150m price tag on his head, his future seems to be pretty set in stone.

Jacobs has reaffirmed this claim, citing his price tag as a big stumbling block for interested clubs.

“Even at those sky-high figures, West Ham are seemingly still sticking to their guns, which is very frustrating for the suitors that are interested in him, and beyond that figure, I don’t see any of the Premier League suitors circling Rice – Chelsea, in particular – paying remotely close to that, not in this window.

Is Declan Rice worth £150 million? 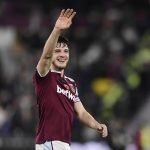 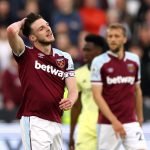 “And therefore, I think that Rice, as he was, will be at West Ham come the first kick of the season and beyond when the window shuts.”

It appears pretty clear that Rice doesn’t see his long-term future at West Ham, having most recently rejected a huge eight-year contract with the Hammers, but with a deal that potentially runs until the summer of 2025, West Ham appear in no rush to sell their captain – which will surely be huge news to the supporters.

West Ham will know that long-term, they will have to plan for life without Rice, and trying to replace someone who led the team in tackles won, touches and progressive carries last season (as per FBRef) will not be easy and may require multiple signings, but for the immediate future, he looks set to lead them out as skipper once again.