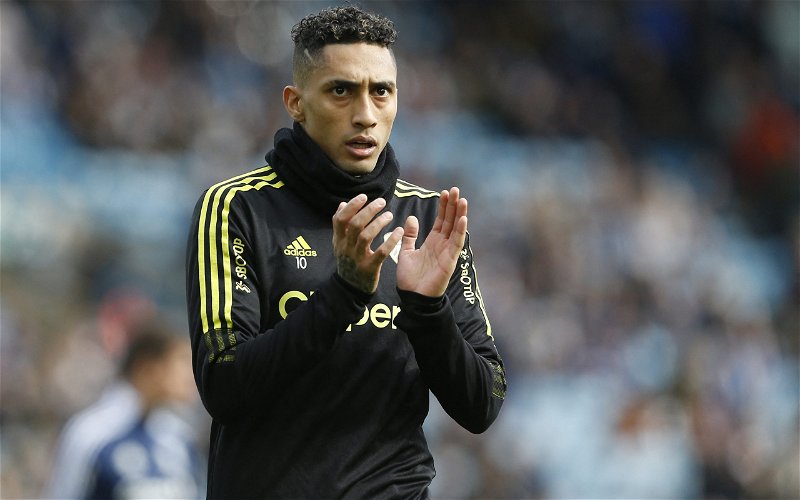 Journalist Charles Watts revealed Arsenal have yet to move for Leeds United star Raphinha this summer – but the Gunners could end up signing the player as they are thin at right-wing with players potentially on the way out.

Arsenal are in the market for a few new players this season after their impressive campaign ended poorly, failing to make the Champions League despite being in the driver’s seat come the final few weeks of the season.

One player who could see himself playing at the Emirates Stadium next season is wantaway Leeds star Raphinha, who has been linked with numerous teams this summer after Leeds narrowly escaped relegation last season.

Watts revealed this latest claim on his YouTube channel, stating that while nothing has materialised so far, the club are interested in the player and could move for him as they are light in his position – and players like Nicolas Pepe could be on the way out.

He said: “As far as I’m aware, nothing has progressed beyond interest at the moment. He is certainly a player that Arsenal are interested in. He’s going to move this summer, I think that’s clear. The Barcelona thing is a big thing when it comes to Raphinha – that’s been going on for a while. I think if Barcelona can find the money to sign him, then that’s where he’s going to go.

“We’ll have to wait and see. But if Barca don’t get the deal done for him, then Arsenal are certainly interested in it.

“So, I can see Arsenal spending money on someone like Raphinha, even though there’s someone already in his position just because of a) his quality, but b) because there’s only one other player in this position – it’s not absolutely stacked out there on the right wing.”

Arsenal need to continue to improve their squad ahead of next season as they failed to see the year out with their incredibly young squad, so they need to add some experience. Raphinha could bring this as he has a couple of seasons of Premier League football under his belt and has endured a relegation battle while arguably being the best option on the team.

Last season, he racked up 11 goals and three assists for Leeds while averaging 2.5 shots, 1.9 key passes, 1.8 dribbles, 1.5 tackles and 0.8 interceptions per game (as per WhoScored). He also ranked in the 90th percentile for progressive passes per game with 5.22 and the 91st for blocks per game, suggesting he works just as hard defending as he does going forward (as per FBRef).

With the rumours that Pepe could be on his way out this summer, bringing in a player like Raphinha who can make an instant impact on the side could be a great move for the Gunners. However, after securing Leeds’ top-flight survival, it could cost Arsenal a pretty penny to get him.