Celtic fans have been reacting to the team news coming out of John Kennedy’s press conference ahead of their game with Aberdeen.

The game itself doesn’t have a lot riding on it for either side given their respective places in the Scottish Premiership table, but that doesn’t mean that the players are just going to give up and stop playing. There’s still pride to fight for, as well as the chance to impress whoever the new manager might be ahead of next season.

One of those players who will be available for selection at Pittodrie is Tom Rogic, who was left on the bench at the weekend for the game against Rangers with some problems, but was confirmed as available by Kennedy in his pre-match press conference.

However, fans weren’t exactly happy to hear that he was back, as they used the interim manager’s comments as an excuse to blast the Australian for his poor injury record over the years, with some saying they’ve had enough of his problems and that it’s time for the club to move on from him:

“The amount of injuries we have is embarrassing”

@_Lennon1967
“Sell him. Great talent when fit but that’s almost never. Never ever known a player as young as him that can’t last past 60 mins anyway.”
@Thetrut54051138
“Should have been sold 3 seasons ago.”
@neilslaught66
“Rogic has had fitness issues for years, and even when he is fit he isn’t, never known a Celtic player who in 8 years can’t last 90 mins it’s disgraceful professionalism.”
@donati_michael
“Same old same old with Rogic. I’ve never known a player to be as injury-prone. Get rid.”
@paulconn75
“Tell him don’t bother starting season now, ta”
@Indie632

Should Celtic sell Tom Rogic in the summer? 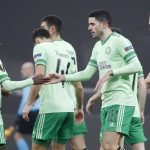 Although given that his contract runs out in 2023, it might be some time before that actually happens.