Tottenham Hotspur right wing-back Emerson Royal has been slammed for his display in the club’s latest defeat.

Sky Sports man Jamie Weir was speaking on the Last Word On Spurs YouTube channel on Sunday night and vented his frustrations with the Brazilian.

Spurs slipped down to fourth in the Premier League table on Sunday after their defeat against Liverpool saw Newcastle United stay third after their win earlier in the day.

Emerson attempted three crosses in the game against the Reds, but none of them found a Spurs teammate, while he was unable to provide a single key pass (via Transfermarkt).

And with the 23-year-old dragged off in the second half for Matt Doherty, Weir slammed Emerson for his performance and lack of attacking ability.

He said: “Look, Royal is not good enough to be playing for Tottenham. I don’t think we can’t defend him any longer.

“He’s just so poor on the ball. His delivery is appalling. There was a moment when he got in a really good position in the second half in acres of space on the right and just put a cross completely out for a goal kick.”

It is hard to disagree with Weir. The 23-year-old is yet to show much to suggest he is capable of improving Antonio Conte’s XI when selected. 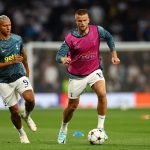 And he has been selected pretty frequently, with 10 Premier League starts to his name already this season – but just one assist to show for it (via Transfermarkt).

In comparison, Ryan Sessegnon and Ivan Perisic have been able to provide Conte with a combined return of two goals and seven assists across all competitions this season.

For a manager like Conte, who depends on his wing-backs to provide creativity in his teams, Emerson has shown he is simply not capable of doing so at this level.