Tottenham Hotspur: Fans will be fuming as footage emerges of incident involving Kane

Tottenham Hotspur fans will be livid to see this footage of a challenge on Harry Kane that wasn’t deemed to be a red card.

It was pretty much the perfect day for Tottenham and Antonio Conte, as they picked up a routine and very comfortable win against Leicester City, which saw them keep up the pressure on rivals Arsenal, with a north London derby edging ever closer.

Was this tackle worthy of a red card?

Spurs fans were treated to yet another Kane and Son Heung-min masterclass, with the striker netting once while the South Korea international stole the show with his two strikes, including a sublime long-range curling effort that settled the game in the second half.

However, despite the 3-1 scoreline, this game wasn’t without some controversy, as Kane went down under a powerful challenge from Daniel Amartey, although neither Jonathan Moss nor the VAR team in Stockley Park deemed it to be worthy of a red card despite the striker being in significant pain. 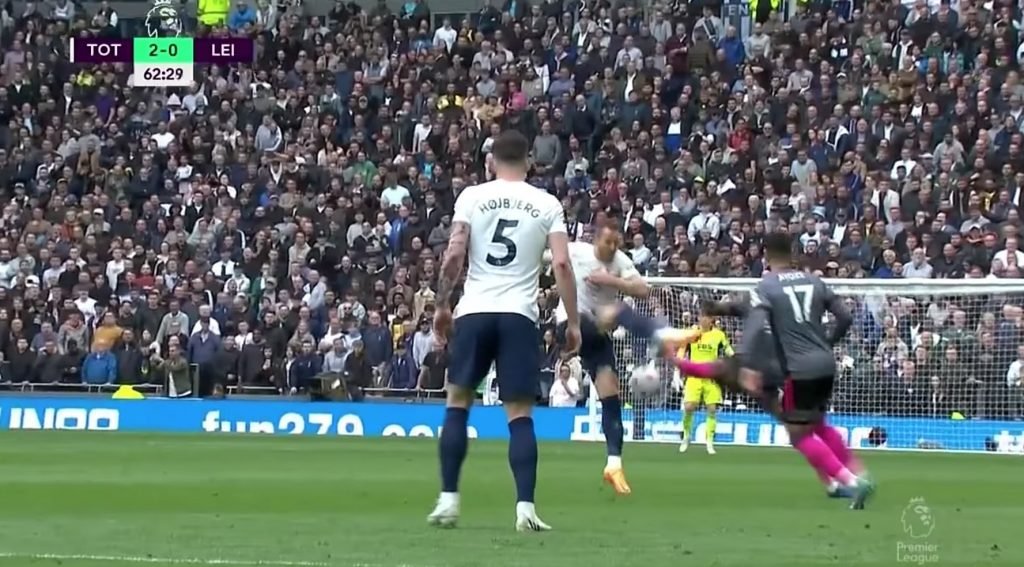 TIF Thoughts on the decision…

While VAR did spend time looking at the challenge that saw Amartey catch Kane on the calf and go down the striker’s leg, the fact they deemed it not worthy of a sending-off may be mindblowing for some Spurs fans, as the image above clearly shows Amartey getting nowhere near the ball.

Given Kane’s injury history over the last few years, fans will be fuming that this went unpunished as they can ill afford to lose their talisman at this stage of the season with the race for the top four still very much in the balance.