Man United’s new manager Ten Hag has held his first press conference as the Red Devils’ boss as his tenure finally gets underway and was even in attendance for the final game of the season as they suffered defeat to Crystal Palace.

Will Ten Hag be a success?

Ten Hag will know that getting into the top four and closing the gap on both Manchester City and Liverpool will be two huge tasks he must accomplish very quickly, otherwise, the Red Devils will risk falling even further down the league.

Reporter Gary Cotterill tried to catch up with Ten Hag outside Selhurst Park, but the new manager didn’t respond to any comments, leading Weir to comment on the awkward incident, saying:

“This really isn’t a great look. Stern-faced, refusing to speak or stop for selfies. And it’s a time for optimism too! So easy to just say ‘thank you, I’m so excited to be here and get started’. He’s acting like the accused in some court case.” 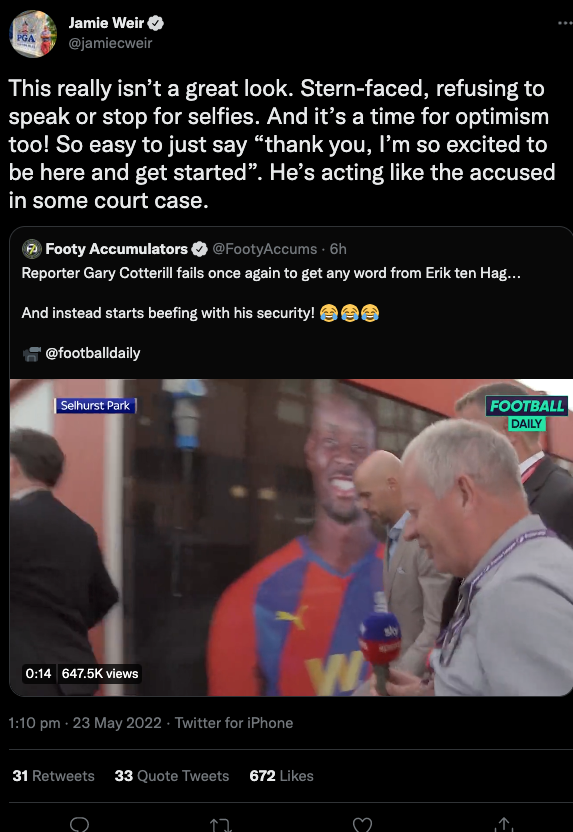 This incident and footage will not have gone down very well within the English press and that’s not something Ten Hag needs, as being at such a big club like Man United will always bring a big media spotlight on people associated with them.

While Ten Hag may not have wanted to answer questions while he was walking to his car, he looked very disinterested in stopping for pictures and smiling for his new fanbase outside of Selhurst Park, which won’t be a good look for someone just starting out in the league.

In other news: Journalist reveals what he’s been told by people ‘close to Pogba’s camp’ in big MUFC update