Tottenham Hotspur midfielder, Giovani Lo Celso, is expected to depart the north London club this summer, according to Michael Bridge.

The Sky Sports man has been speaking to This Is Futbol to discuss the future of the Argentine playmaker who is currently enjoying a loan spell with Villarreal.

Do you want Lo Celso back at Spurs? 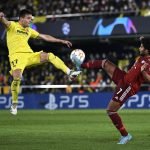 Lo Celso is now set to play in a Champions League semi-final against Liverpool following the La Liga side’s recent victory over Bayern Munich in the quarter-finals.

And the Spurs loanee played a big role across the two games against Bayern with 180 minutes racked up and the Man of the Match award for the first leg in Spain.

With the £27m man playing a big role with Villarreal, Bridge believes Argentine could be set to depart north London having joined back in back in 2019, initially on loan:

“They’re going to have to let go of people. I think Lo Celso will get a move. You know, Unai Emery has already said, ‘I love him’. You’ve got probably other teams will want to go for him as well,” said Bridge.

We tend to agree with Bridge in thinking the possibility of Lo Celso not playing for Spurs again is growing increasingly likely as the days go on.

The Argentine has made a big impact on Unai Emery’s side since arriving with 13 appearances across all competitions already under his belt.

Given he was clearly not favoured by Antonio Conte, his impressive form for the La Liga side is only good news for the north London club ahead of the summer.

Lo Celso impressing for Villarreal will only increase the possibility of the Spanish side looking to make the deal permanent and if not, his Man of the Match performances have surely caught the attention of other European sides.

And with Dejan Kulusevski already eclipsing Lo Celso’s contribution in the Premier League, his potential departure could end up being a win-win for both parties.

In other news: Journalist hints Levy set to secure first Spurs summer signing, he is an ‘animal’