A whole host of Tottenham Hotspur fans have slammed training footage of Tanguy Ndombele on Twitter.

It has been widely reported over the last few days that Tottenham Hotspur are looking for a way to get Ndombele out of the club this transfer window, which could be largely down to the way he walked off the pitch when they were losing against Morecambe on Sunday.

Will Spurs sell Ndombele this month? 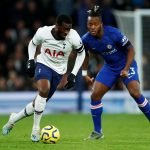 However, Ndombele is reportedly not unhappy at Spurs, which could make a deal to ship him off difficult, though if he was, then this training ground footage of him putting minimal effort into running will not have convinced many Spurs fans he’s committed to the cause.

A lot of Tottenham fans have flocked to this latest club footage on Twitter.

“Wish Ndombele had run that quick on Sunday”

“Ndombele runs like someone’s holding the door open for him”

“Ndombele should be training with the u23s”

“Must be payday, Ndombele running”

These Spurs fans appear to be taking a sarcastic view to actually seeing Ndombele running, which was not evident against Morecambe when he trudged off the pitch, but they may have to get used to seeing that a bit more as his long-term contract could make it difficult for him to be sold this transfer window.

In other news: ‘Would be a real coup’ – Sky Sports man tips ‘huge bloke’ as possible ‘Dier upgrade’ at Spurs