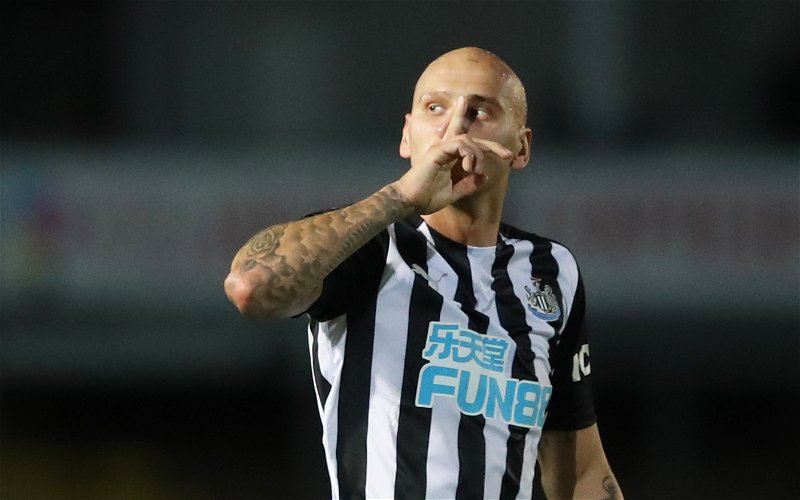 Newcastle United fans have been reacting to comments that have emerged from Jonjo Shelvey following their draw in the Premier League.

Having come into the game in a rather perilous position in their attempt to stay in the Premier League, it was arguably a must-win game for Eddie Howe’s men, but they could only manage a 1-1 draw at St. James’ Park, hampered by Ciaran Clark’s red card in the opening stages.

Speaking after the game (as quoted by The Chronicle), Shelvey tried to put a positive spin on things, talking about the players that the team has and still believing that they can get out of the tough situation that they are in, saying: “I’m not really concerned because I know what we have in the dressing room. We just have to keep believing and stick together. Everyone is buzzing round the place. We’ll keep fighting for these fans.”

Shelvey’s comments were relayed to fans by @NUFC360, where it generated some interesting responses, with some of them left rather confused by the attitude that the midfielder had:

“Jonjo lad we’re bottom with no wins, probably time to be concerned”

@nufcsaintmax
“Buzzing if you’re buzzing after not winning after 14 games Jesus”
@Barmy2Toon
“Need to be concerned, 0 wins rn and the only best result we can get is a draw beside losing…”
@Thunderlighty
“deluded”
@NUFCTVTwit
“That makes one of us”
@SamJone20879248
“You have to be concerned blud”
@manlikefola_
“Are u kidding me?”
@bagusemara

You can somewhat understand Shelvey’s comments, because whilst their situation does look perilous – with statistical website FiveThirtyEight giving them a 77% chance of relegation – there are still 24 games to play and it might not go over too well if he came out and publicly admitted defeat at this stage of the season.

In other news: ‘I think he could do the job. But…’ – Steve Wraith drops interesting Benitez DOF claim at NUFC