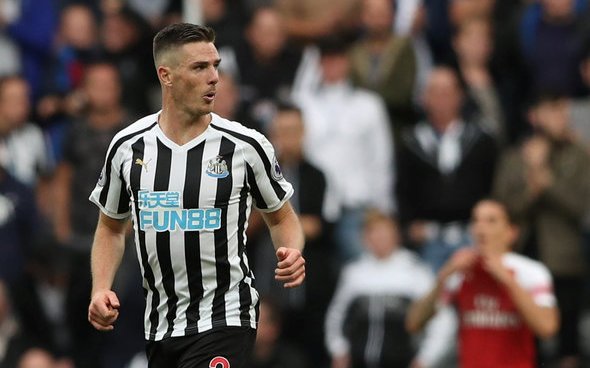 It doesn’t take a genius to work out how dismal the first part of Newcastle United’s season has been. They’re rooted to the bottom of the table, holding the unwanted record as the only team yet to win this season in the country.

They posted Joelinton training pictures and Ciaran Clark was in the background of one, smiling/laughing, much to the disgust of the Toon Army, and they didn’t hold back when reacting to the content.

How did the Newcastle fans react?

“Ciaran Clark there smiling away despite relegating us, absolute weapon. Get his contract torn up. Sunday league footballer.” @trevorslater

“Not sure what Clark has got to be smiling about.” @TheWolfOfNCL

“Take Clark out that first pic and it’s perfect.” @ConnorDickson_

“Clark there, laughing and joking…” @MattyDryden

Evidently the centre-half has been slaughtered by his fans for the picture; ultimately that’s a little harsh.

No player will be happy with the current situation at the club, and all will want to rectify the situation. Howe will need to create a positive atmosphere if he has any chance of saving Newcastle’s season.

Clark obviously will be as distraught as anyone given the circumstance they find themselves in, but if he mopes around all day in training that won’t improve his performances or the morale of his teammates. Hopefully Howe is creating a positive atmosphere in the dressing room and it helps the side pick-up results as soon as possible.

In other news, George Caulkin has delivered some insight into the dressing room mentality…