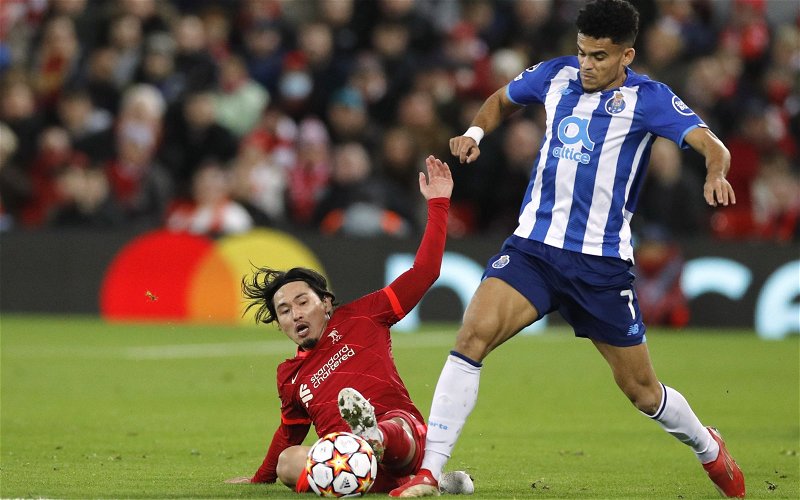 Duncan Castles has been speaking on The Transfer Window podcast about Liverpool’s interest in Luis Diaz.

With contract talks between Mohamed Salah and Liverpool still at a stalemate and Roberto Firmino suffering from both a lack of form and injuries, the Reds could well be looking to freshen up their attack, which has created a devastating front three alongside Sadio Mane for several years now.

Liverpool are already three points behind Manchester City and that may show a need to upgrade a squad that has brought success both domestically and in Europe, so adding more youth into their ranks would not be the worst thing, and someone such as linked attacker Diaz could well be a top signing because of his attributes he’s showcasing out in Portugal, as Castles explained on the podcast.

Castles believes that Porto winger Diaz would be almost a perfect player for Klopp’s side.

“Liverpool have a budget and are targeting a top-level forward – so significant money to spend to improve that position.

“They’re ready to do it in January if the right player becomes available in the January window, but definitely will do something in the summer if they have to wait on a particular player.

“This player who is one of the candidates – it seems more likely that they will have to wait until the summer to get him – it’s Luis Diaz from FC Porto.

It would be a sensational move for Liverpool and Klopp to sign Diaz, not just because of the player he is and the numbers he’s boasting with FC Porto, but also the fact that their city rivals Everton attempted to sign him over the summer, so that would certainly rub salt into the wounds of Evertonians who have experienced a rough ride of things this season.

If Salah was to leave Liverpool due to both sides not being able to come to an agreement, it would be a major blow and nearly impossible to replace his goal contributions as he’s been simply sublime at Anfield since arriving from Roma, but bringing in someone much younger in Diaz who can also press very well and is always looking to be busy, according to Castles, would potentially soften that blow.