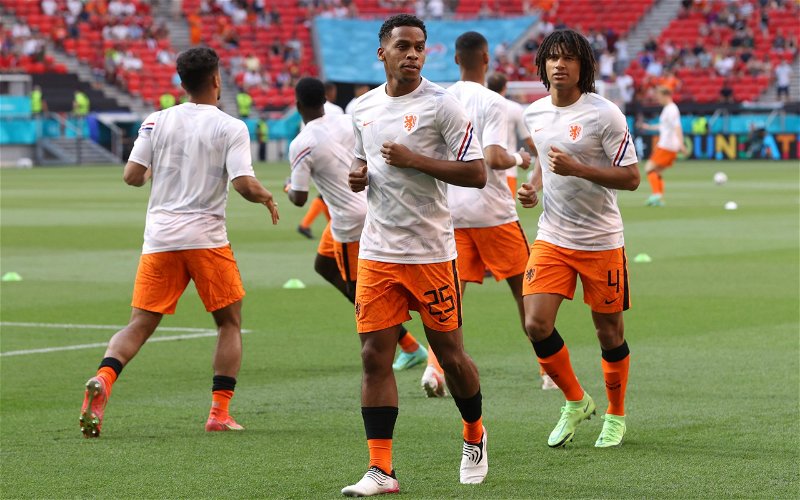 Journalist Jonathan Shrager revealed on Twitter last month that United were the frontrunners in the race to land the 20-year-old Ajax centre-back, who starred under new Red Devils boss Erik ten Hag in the Dutch capital.

However, plans were thrown into question when the defender hinted in an interview with De Telegraaf that he would be happy to stay put at Ajax, where he could play Champions League football.

Transfer insider Rob Blanchette recently revealed that the Amsterdam club were willing to meet any offer United throw at the £27m-rated talent, but having only broken into the Netherlands side a year ago, Goldbridge has shared that Timber is worried about his international place – but the podcaster has stressed that he isn’t “panicking” about whether the defender will make a move to Old Trafford.

“If Man United are not offering him the opportunity to play first-team football, he’s going to stay at Ajax. If we are selling him first-team football at Manchester United, then he’s got no concern about his World Cup spot, because he will just walk straight into the team, anyway. So I’m not panicking about Timber at all.”

Still under contract in Amsterdam until 2024, it is still unknown what fee Ajax would command for the 20-year-old, but considering United’s woeful season, tying down one of the continent’s fastest-rising centre-backs would be a shrewd move. He has even recently been called ‘fantastic’ by his international teammate Matthijs de Ligt.

Timber was a key figure in the Ajax side that conceded just 19 league goals this past term, so United could be looking at one for the future as well as the present if they are to pull off this signing.