Ex-Aston Villa striker Gabriel Agbonlahor wants his former employers to raid relegation-threatened Leeds should they go down this season.

Leeds suffered a third straight defeat at the hands of Chelsea as they were beaten 3-0 at Elland Road last night and the Dan James red card in the first half perhaps epitomises their implosion this term.

The loss leaves the Whites languishing in 18th on goal difference and with a game less than Burnley left to play.

Now Villa’s all-time leading Premier League goalscorer Agbonlahor, who scored 86 at Aston Villa, has called for the club to take advantage of the Yorkshire club’s situation posting on his Twitter account: 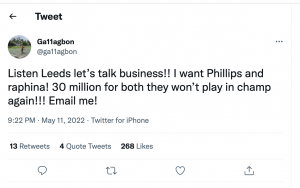 TIF Thoughts on Raphinha and Phillips to Villa…

While Steven Gerrard can only call upon Bertrand Traore and Leon Bailey as out-and-out wingers he seems to be sticking with his narrow 4-3-1-2 formation and has tended to play Emiliano Buendia and Philippe Coutinho on the flanks when needed.

It is perhaps evident that he is convinced with his wide players and will introduce a suitable formation next season when he has the personnel, that Raphinha could help with but it is Kalvin Phillips who is the more intriguing of the duo.

According to The Times, Villa have ‘emerged as frontrunners’ in the race to sign Kalvin Phillips from Leeds.

Described as a ‘quarterback’ by Rio Ferdinand, Leeds’ no.23 could be targeted by the club to play at the base of the midfield where the west Midlanders are thought to be prioritising a signing.

His contract is up at the end of the 2022/23 season but you would think that it would take more than the £30m that Gabby suggested to attain Phillips alone never mind his Brazillian teammate however relegation would certainly help negotiations.

AND in other news, Journalist claims £12.8m-rated ace has played ‘last’ game for Aston Villa