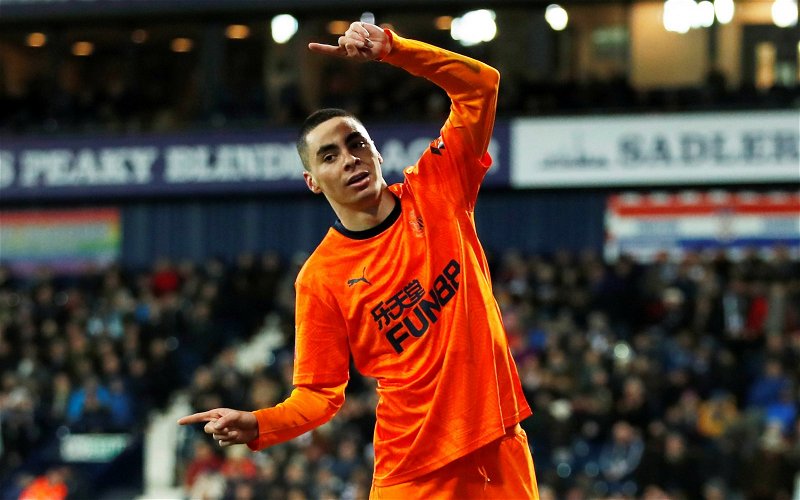 Newcastle United are likely to go under a huge transitional period as they are Premier League strugglers who now have the richest owners in the world of football.

With that, we may see high-profile names through the door such as Kieran Trippier, but we should perhaps expect to also see some outgoings of those who are no longer in the long-term visions of the football club.

Do you think Newcastle should get rid of Almiron?

One player who could be on his way out is Miguel Almiron, especially when we see what his agent has been saying. Daniel Campo was speaking on South American radio (as per Chronicle Live) calling for talks over Almiron’s future on Tyneside, claiming that the Paraguayan has a release clause of nearly $80m (£59m), but they will see what the club says as he is apparently attracting interest from Spain and Italy.

NUFC360 picked up on the comments and relayed them to its followers on Twitter, with the Toon Army buzzing at the potential sale of the midfielder.

“8 million for him would be daylight robbery.”

“Yeah take whatever we can for him, he is absolutely shocking.”

“He’s rubbish, we would be lucky to get 8mill.”

“I’d pack his bags for a quarter of that fee!”

Considering how underwhelming he has been this season, racking up 19 appearances for the Magpies and yet to register either a goal or assist, that’s just not good enough for a Premier League attacker and it would be a surprise if Newcastle were able to get anywhere near his rumoured release clause for Almiron – while it appears the fans just want rid.