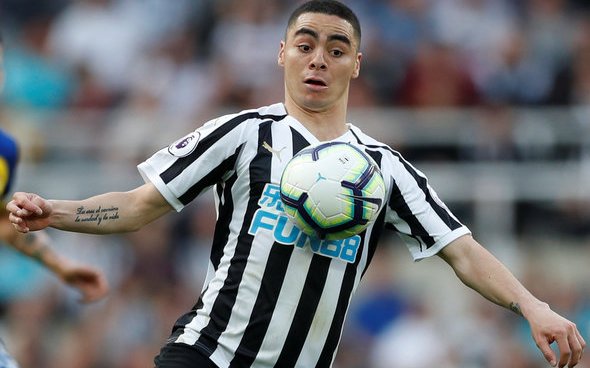 Newcastle United finally managed to win a game this season, battling past fellow strugglers Burnley 1-0 thanks to Callum Wilson’s goal just before the break.

It felt like a must win game for the Magpies given the nature of their opposition and the run of fixtures they have prior to the January transfer window, but win they did.

If the importance of the win couldn’t be highlighted more, they managed to climb off the foot of the table on goal difference, although Norwich City have a game in hand. The pressure is firmly on the Canaries now who travel to Spurs tomorrow.

One man who Newcastle fans were particularly impressed by was Miguel Almiron, and below is a selection of the best responses from the Magpies faithful.

How the Newcastle fans reacted to Almiron’s performance

“Almiron, what a game.” @ZacSaleski

“What a win, Almiron amazing. His tracking back, tackling and his forward runs… Wow!” @JamieOw2016159

“Almiron, work rate and a great outlet from defence to attack.” @petemcc_peter

“I think I’ve aged 30 years in that match! Thank god for the first win, Miggy #Almiron is my Man of the Match, he ran his socks off #Nufc.” @toondoonunder

“Almiron has been amazing in this second half.” @LukeRogerson12

“Huge 3 points. What a performance from Miggy  Look what happens when you start him” @AleFoxxx

“Shelvey, best game in a black n white shirt for me. But many covered every blade of grass. Watch it for almiron, he’s going places that kid” @DBS050106

Clearly the work rate and desire from Almiron had the fans in awe. That hunger, desire and commitment will be the minimum needed for Howe’s men going forward if they are to escape their perilous position.

It’s been a tough few weeks for Howe, but it will all feel worth it now to finally have the mark in the win column on the table. This will certainly have been a boost for the Toon Army who have had plenty to complain about of late, but can now finally celebrate.

In other news, Newcastle fans fuming are as snap of Ciaran Clark emerges