West Bromwich Albion fans have been reacting to footage that has emerged of Sam Johnstone from their game in the Championship.

Valerien Ismael’s side drew 0-0 away to Blackpool in a game that has put a dent in their chances of gaining automatic promotion and closing the gap between them and the top two, as they ended the night seven points behind 2nd-placed Bournemouth.

Things could have been worse for the Baggies, however, were it not for the efforts of England goalkeeper Johnstone, as he was forced to pull out all the stops to keep the home side at bay.

He made four saves on the night (via WhoScored), but the most impressive of them came just before the end of the first half as he was forced into a double save from Gary Madine and Keshi Anderson.

Footage of the save was posted on the club’s Twitter account for fans to react to, where there were plenty of fans on hand to share their praise for Johnstone and his effort on the night:

“Reaction saves are his strength, that was fantastic! This is why it’s better for us to lose him on a free in the summer than to sell him for a small fee in January that couldn’t even fund improvements elsewhere in the team. We’ll need him if we stand any chance in the play offs”

@JonW1995
“World class keeping from a awesome keeper. Top work SJ!
@bagster1971
“That man’s a machine”
@KyyleJones
“We don’t even deserve him”
@KJ_93x
“Unreal that is SJ”
@cam_overfield1
“Brilliant first save and had no right to make that second”
@electrodecay

Do you think Sam Johnstone will depart West Brom in Janaury? 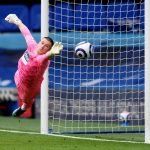 If only the outfield players did their job as well as Johnstone on the night, they might have been able to pick up all three points rather than just one.

In other news: ‘We understand’ – Joseph Masi drops claim on West Brom 17 y/o amid rumours