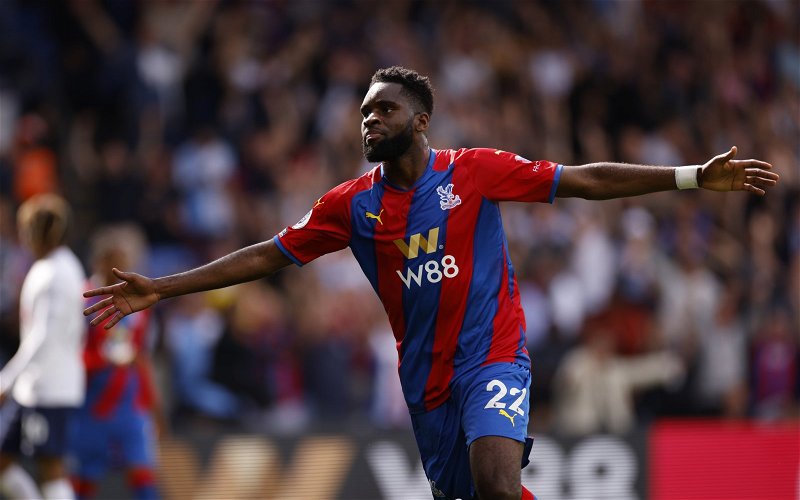 The 23-year-0ld Frenchman enjoyed a trophy-laden spell at Celtic Park before brining the curtain down on his time at the Hoops this summer, moving to Premier League Crystal Palace for a fee of approximately £14 million.

The Frenchman has hit the ground running under Patrick Vieira, including scoring a brace on his league debut against Tottenham in a 3-0 victory, and has made the starting striker spot his own at Selhurst Park.

However, the 23-year-old hasn’t been quick to forget his memories of Glasgow’s east end, and while speaking on UMM and as reported by The Daily Record, Edouard said about the Celtic supporters:

“I stayed four years there. I have some good memories, some good titles, so always (be grateful for them).’

Edouard was discussed the feeling of playing in the Old Firm Derby, in which he scored seven  goals against fierce rivals Rangers during his four-year stint.

‘It’s incredible, I’ve never seen an atmosphere like this. When you play against Rangers at Celtic Park, with the Celtic fans it’s crazy.”

After breaking his silence on his departure from the club since departing for the Eagles this summer, many Celtic fans have taken to Twitter to express their thoughts.

What did these Celtic fans make of the Eduoard’s comments?

“Thanks Odsonne Edouard for your goals and being a Celtic legend hail hail, good luck with your future”

@182Simpsonw
“Then why did you give up trying the last two years if you loved it that much!!”
@AuleyPatrick
“What a guy”

“Love you forever my G”
@liamboyle_88
“Just when I thought Kyogo had filled that Edouard shaped hole in my heart…”
@bingyboy
“Love you king”
@callumhughess67
“Fraud”
@ScottRo17731631
“He downed tools during the 10IAR season & only deciding to upped his game as that campaign came to an end. His disinterested, lacklustre displays & entitled childish attitude at the beginning of this season was an insult to the club that made him & the fans that adored him”
@thebhoyz88

The Frenchman also highlighted the Scottish Cup Final double in 2019, to seal the Treble Treble, as his highlight of his career to date.

Edouard continued: “It’s the best feeling, the best, because when you are a player you play to win titles, and score in games like this, and after you win the title, it’s unbelievable.”