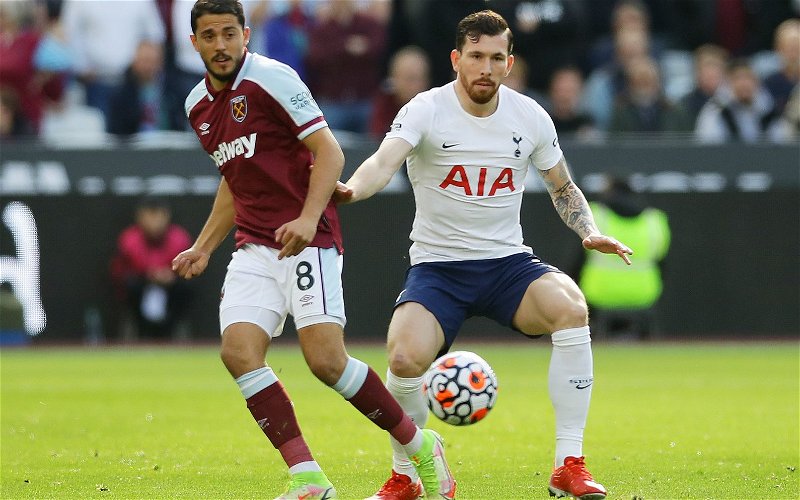 Lots of Spurs fans have taken to Twitter to slam Pierre-Emile Hojbjerg’s display against West Ham in the Premier League.

Currently level at the interval, Spurs are looking to secure victory against David Moyes side at the London Stadium, a result that would send Nuno’s side into the top four.

However, the north London side have comfortably been the inferior team in the first half against the Hammers and are perhaps fortunate to not be a goal down at half-time, with the home side having various chances through the likes of Pablo Fornals, Tomas Soucek and Michail Antonio.

Hojbjerg, lining up in a midfield pivot alongside Oliver Skipp in a 4-2-3-1 formation for the away side, endured a poor first half.

The Denmark international looked to be overrun in the centre of pitch by West Ham midfield counterparts Declan Rice and Soucek and, alongside Skipp, has failed to provide any real defensive protection to Nuno’s back four with the Hammers attacking players easily bypassing the away side’s midfield to create several goal scoring chances for the away side.

What did Spurs fans say about Hojberg’s performance vs West Ham?

“Early exchanges but it’s clear to see that Spurs need a deep-lying playmaker who’s able to defend and play balls forward. Couple of diagonal and forward passes by Skipp and Hojbjerg going stray”

“There was no point of Hojbjerg in this team”

“I feel bad for Dier and Romero. They’re trying to play it out but both Hojbjerg and skipp aren’t moving. They’re hiding behind West ham attack line”

“Hojbjerg’s pass has no sophistication. He keeps kicking the ball into the sky.”

After making 11 changes during their midweek Conference League defeat to Vitesse Arnhem, it is hardly a surprise that the Portuguese has resorted to the original XI that defeated Newcastle 3-2 last week at St. James Park. However Spurs will need to considerable improve in the second half against the Hammers if they are to become the first team in Premier League history to begin a top-flight season with three wins, three defeats, then three further wins and move up to fourth in the league table.