Lots of Tottenham Hotspur fans have flocked to Twitter to voice their thoughts on the latest transfer claim to emerge regarding striker Harry Kane.

According to Eurosport, the England captain is believed to be one of the players in which the new owners at Newcastle United have their eyes on as a potential target. 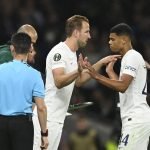 The Tyneside club have recently been taken over by a Saudi Arabian-based consortium with a believed net worth in the region of £320bn.

And with the new owners setting ambitious targets for the club, the latest on their reported wishlist is the England striker, who had his future questioned throughout the summer.

Spurs fans flocked to Twitter to share their thoughts on the latest claim to emerge regarding the future of the striker, who is yet to open his account in the Premier League this season.

Tottenham face a trip up to the North East on Sunday as they face the Toon Army when Premier League action resumes following the latest international break.

After a summer of speculation and a poor start to the season, it seems these fans would actually welcome an exit for their striker, who has scored 227 goals for the club.