Fichajes (via MailOnline) recently reported that Manchester City are eyeing a move for Phillips, with Guardiola seeing him as a replacement for Fernandinho.

Amidst interest in the Leeds midfielder, Teamtalk have reported that the club are prepared to make him the highest paid player at Elland Road to fend off any interest, while his agent has confirmed to The Telegraph that talks over a new deal have been held. 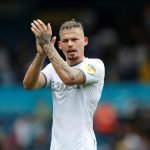 Carlton Palmer believes that Phillips is a Manchester City type player but thinks that Guardiola will target a striker, telling This is Futbol:

“I think they’re in the hunt for a striker. I don’t know maybe they are looking past next year, Fernandinho, maybe at the end of the season they might have a look at him. You know, he would be a Manchester City type of player for sure but no, I think Man City you’ve seen that they’ve beat Chelsea.

“Pep remains remarkably calm, he knows what he’s doing and he knows what his blueprint is. It’s clear he wants a striker; I’ll be very surprised if it’s not Haaland. I think he might have another bat for Kane.”

City added to their already star-studded squad this summer with the signing of Jack Grealish from Aston Villa and they also made Scott Carson’s move to the Etihad Stadium permanent. After strengthening their team, City will be hoping that they can add further silverware to their trophy cabinet this season after last term’s Premier League and Carabao Cup triumphs.