Former Leeds United player David Norris believes that Noa Lang would excite supporters but doesn’t think he would be a marquee signing for the Whites.

Lang was linked with a move to Elland Road during the summer transfer window and despite that not happening, Voetbal24 (via Sports Witness) have reported that Leeds are in the mix to sign him ‘in the winter’ but face competition from Arsenal and AC Milan. 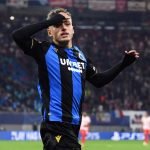 On transfer deadline day Leeds completed the signing of winger Daniel James from Manchester United for £25m according to BBC Sport and whilst Norris believes Lang will excite the fans, he doesn’t believe he would be a marquee signing for the club.

“I don’t think he’s that marquee signing that everyone goes ‘wow here he is, this is the player, this is a statement.’ But I think at the same time with what he’s done and with his age you’re thinking this is interesting, this will be exciting to see what he is all about and what he can do and where he can go,” Norris told This is Futbol.

Lang has four goals and four assists in 13 games this season in all competitions, so far for Club Brugge and has featured as a left-winger, a centre-forward, a second striker and an attacking midfielder in those games.

Formally of Ajax and Twente Enschede FC, with his contributions so far this campaign, Lang has 58 goals and 39 assists throughout his career and so certainly knows where the back of the net is and is also very creative in the final third of the pitch.

With interest from elsewhere, if Leeds want to land Lang, they are perhaps going to have to move swiftly when the January transfer window opens.