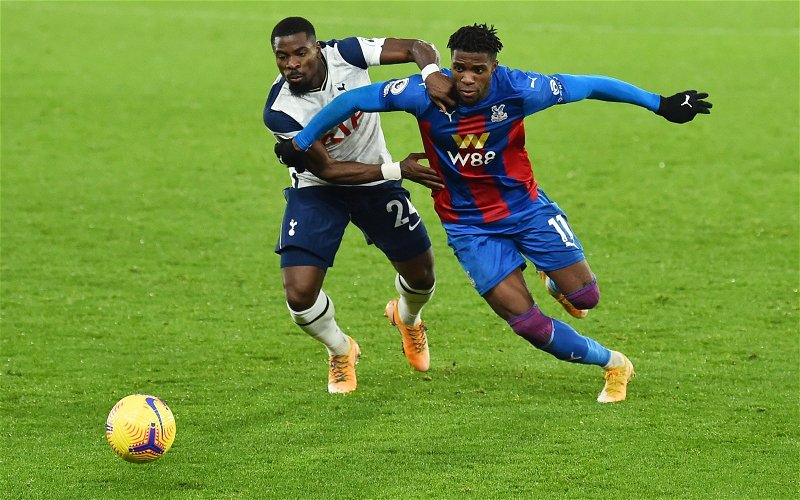 Dan Cook has been speaking on the HLTCO podcast about links suggesting Wilfried Zaha could move to Newcastle United.

Zaha has spent almost the entirety of his career at Selhurst Park apart from one disastrous spell at Manchester United and a loan spell with Cardiff City – and recently became the club’s fourth-highest appearance maker of all time, despite links following him about wanting to leave the club.

The winger is now 28 years old and has just under two years left on his contract, which could see some clubs begin circling the Ivorian for a cut-price swoop. Former Palace player Mark Bright has suggested on TalkSport that Zaha could move to newly taken-over Newcastle United given their newfound riches.

However, Cook was not convinced over Zaha leaving for Newcastle.

“If you look at his age profile, you look at how his game has adapted and what he can be expected to do in the next few years, I’m not sure it’s necessarily a good fit for him. I can understand why Newcastle fans would want him – the prospect of [Allan] Saint-Maximin and Wilfried Zaha in the same starting 11 is mouthwatering, to say the least.

“But in terms of Zaha’s immediate ambitions, I don’t really feel that Newcastle United fit the bill. Obviously, I can’t speak for Wilf, he may well be open to the move – particularly if the money on offer is comparable to that he’s getting at Crystal Palace.

“I feel like it’s a move that would be more likely to suit him and tick the boxes he was looking to check off in 18-24 months’ time and I just don’t think the timelines are necessarily going to match up that well.”

Zaha’s price tag may well have gone up from last season, despite his contract running down. Given he was deployed as a striker quite often by Roy Hodgson, which saw him return 11 league goals (the best of his career), potential suitors could now view him as either a winger or a striker – and being Premier League proven is always a bonus.

After a standout campaign last year, Zaha appears to have fully bought into Patrick Vieira’s system and style of play, with him attempting the fourth-most dribbles in the Premier league, with last season seeing him rank just inside the top six for the same stat (FBRef), so he appears to be on course for another season of willingly dragging the Eagles up the pitch.

In terms of a move to Newcastle, as Cook mentioned, Zaha would almost be taking a sideways step given that the Magpies won’t be at the right end of the table in the immediate future, and he would almost certainly not be the main man given Allan Saint-maximin’s presence at St. James’ Park, so he may see better off remaining with the Eagles.