Celtic fans have been reacting to footage that has come out from their recent win over FK Jablonec in the Europa League.

Celtic cruised through to the next round of the competition following a 3-0 win at Celtic Park that saw them go through 7-2 on aggregate. And even though they were convincing when it came to the scoreline, that didn’t mean that it was a totally easy night for them, as Hart can attest to.

Hart hasn’t exactly had the best run of form in recent years, a far cry from the days when he was the undisputed No 1 for the England team, but hopefully playing for Celtic will give him a new lease of life, and based off his performance against the Czech side, that’s exactly what’s happening.

He pulled off two very good saves in quick succession to keep the visitors at bay, footage of which the club shared online alongside a video of the crowd’s reaction to them as they happened, and it’s fair to say that the fans were mightily impressed with what they saw:

Are you happy with the signing of Joe Hart? 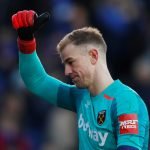 If he can keep pulling off saves like this, then Celtic might just be in with a shout of being serious challengers for the league title once again following a poor showing in 2020/21.

In other news: ‘What a player this boy is’ – Many Celtic fans blown away by ‘outstanding’ 26-year-old