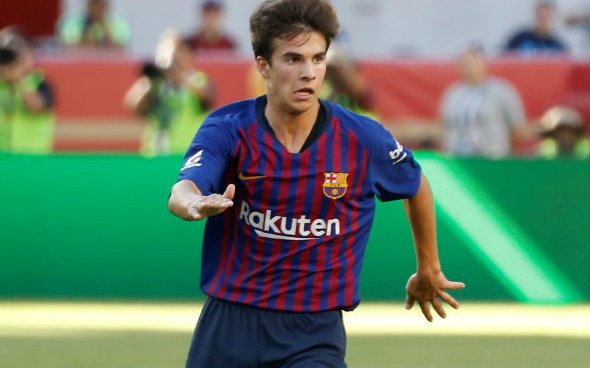 Many Leeds United fans have reacted with great excitement after Barcelona prospect, and former target, Riqui Puig has been told he can leave the club.

Spanish outlet Marca has claimed that the Spaniard will be allowed an exit this summer after being shown the door by manager Ronald Koeman. In the past, Leeds were linked with Puig, but nothing official ever came to pass.

Leeds United reporter Joe Donnohue shared the news on his Twitter feed and it soon drew a response from a number of the club’s fans.

“The signing of Puig alone would turn a bad transfer window into a good one.”

@lufcjm
“Please @LUFC.”
@lauralufcmot
“Imagine.”
@snorton82
“Yes please!”
@Upsdowns12
“Puig is great trust me I watch Barca I know… He is energetic and presses from the front… is quick in his decision-making and can keep possession really well… he is young so needs some work but at around 20-25 mill, he’ll be a steal!!”
@BishalDasP
“The exact type we need!!”
@MasonFeltham
“Orta to pull another masterclass”
@JuceeRob

According to Mundo Deportivo (via Manchester Evening News), the midfielder has claimed in the past that he hopes to play in England at some point – albeit for Manchester City – so perhaps he would see Leeds as a stepping stone towards working under Pep Guardiola.

With limited opportunities at Barca last season, now could be a good time to jump ship before his career begins to stagnate.

Whatever happens, it seems that these Leeds fans would welcome him with open arms.