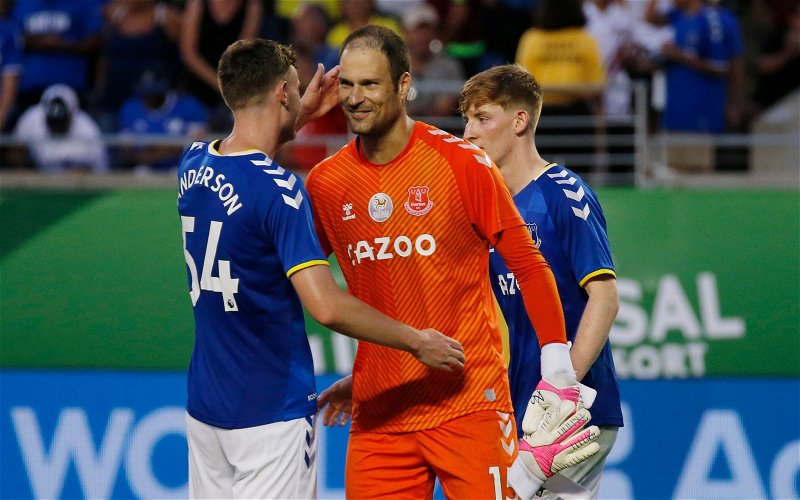 The experience of Asmir Begovic will give Jordan Pickford confidence, according to former Toffee Michael Ball.

Pickford is coming off the back of a terrific Euro 2020 campaign with England, which saw the Three Lions reach the final of the competition and the shot-stopper play every minute of every game.

New Everton manager Rafa Benitez has brought goalkeeper Begovic to Goodison Park as competition for the Toffees number one Pickford, with Ball believing the arrival of the experienced shot-stopper, will give Pickford confidence.

He told TIF: “Begovic coming in, obviously his experience is huge and will give Jordan that bit of confidence as well, he can pick the brains of Begovic but also can give a rest for Jordan if and when needed.

“It happened last year, and it worked well for them when they had to take Jordan out of the media highlight and it worked for Everton, so it was important Everton brought in a goalkeeper who’s still got the ability to stand-in when needed and also push Jordan to keep his levels really high.”

Begovic signed for Everton on a free transfer from Bournemouth, where he featured 51 times in all competitions last season, keeping 18 clean sheets in the process. The Bosnian has plenty of Premier League experience, as he has featured in over 250 top flight matches and has a Premier League winners medal from his time with Chelsea.

With the Premier League kick-off just a couple of weeks away, Rafa Benitez has moved to strengthen his squad and provide competition, as along with Begovic arriving at Goodison Park, the Toffee’s have also completed the signings of Andros Townsend and Demarai Gray.