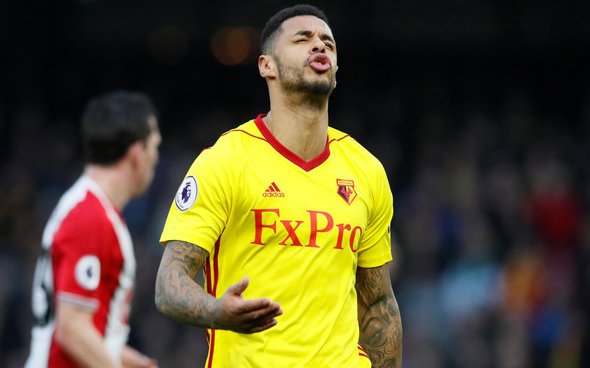 West Brom fans have reacted online after some news emerged linking them with a potential new summer signing.

The Athletic has reported that Watford striker Andre Gray could be somebody the Baggies chase in the remainder of the transfer window.

The report explains that for the second season in a row, Gray remains an option for the club.

WBA Report shared the news on Twitter, explaining that the player now only has one year left on his contract at Watford, and so he should be available at a relatively affordable price.

It didn’t take long before a collection of supporters offered their opinions on the links.

Here’s what these West Brom fans had to say

@buutler9
“What is happening man? Absolutely no way we should be looking at him, dreadful player.”
@JamieTheo2
“If we were gonna sign him we may as well have kept Hal Robson-Kanu.”
@ItsSamson2
“No, just no.”
@markwba3
‘We don’t want him.”
@luis_turton
“No.”
@19jem92

It’s evident that at least a section of the West Brom fanbase are adamant Andre Gray would not be a good fit for the club.

The striker played 30 times, scoring on five occasions, as Watford managed to secure promotion back into the Premier League last season (via Transfermarkt).

Perhaps the Baggies faithful don’t consider this recent goalscoring record quite prolific enough. They could also have concerns about his form in England’s top division in the season before last, when he netted just twice in the league.