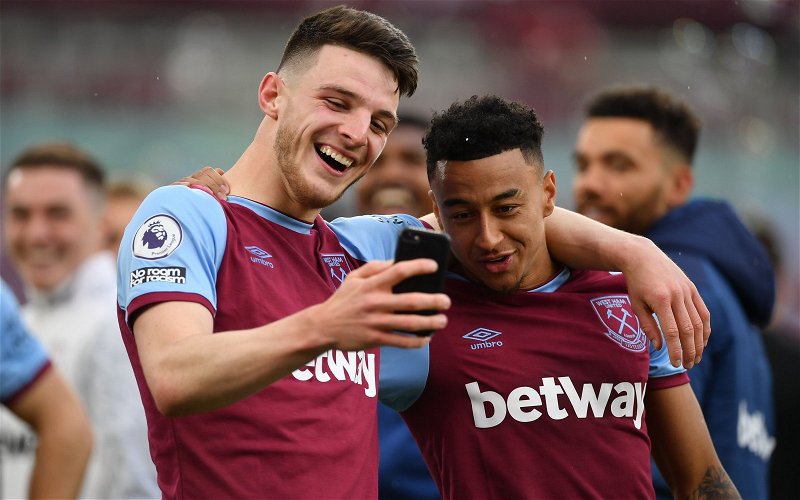 On the latest edition of The Football Terrace’s The Done Deal Show, transfer insider Dean Jones has been discussing all things transfer-related.

One name which Jones discussed was the West Ham and England midfielder Declan Rice, amid speculation surrounding his future with the Hammers.

Will Declan Rice leave this summer?

According to a report from ESPN, Rice has so far turned down a new contract with the Hammers and with three years remaining on his contract, he is valued at £80m.

Manchester United and Chelsea have been linked with a potential summer swoop for Rice, however, it is believed he will not be used as a makeweight for a possible deal for Jesse Lingard.

Discussing the future of the 22-year-old West Ham ace, Jones had the following to say on his future.

“I think Declan’s had his head turned. I know for a fact that he is seriously considering leaving, and that he would be interested in joining Chelsea.

“It makes so much sense, he’s been at the club before, he’s got a best mate there, he knows the area – all the pieces fit in for him going to Chelsea.”

This could make for a very interesting summer for the England midfielder given he has reportedly turned down a new contract offered by the Hammers.

West Ham will be playing Europa League football next season having finished the 2020/21 Premier League campaign in sixth place, however, Jones has suggested he would be open to a move this summer to a Champions League club.

With a reported valuation in the region of £80m, we are interested to see whether either Chelsea or Manchester United would be willing to spend that type of money on Rice.