West Ham United club insider @ExWHUemployee has been sharing some details regarding Hammers winger Andriy Yarmolenko and a potential move away from the east London club this summer.

This comes after Ex co-hosted a recent edition of The West Ham Way Podcast where he spoke about a range of topics concerning David Moyes’ side.

On the subject of Yarmolenko, Ex had this to say about the player.

He said: “There’s obviously talk of Yarmolenko possibly going again, no offer has come in for him.

“A fair few Turkish sides were looking at him and a couple of other countries, I think a Spanish side as well, so it’ll be interesting to see if we get an offer for him.”

West Ham signed Yarmolenko during the 2018 summer transfer window from German side Borussia Dortmund in a deal worth £18 million (as per Transfermarkt).

Since then, the 31-year-old, who is currently valued at £3.6 million, has made 54 appearances for the Hammers across all competitions, in which he has managed to score 10 goals and provide six assists along the way (per Transfermarkt). 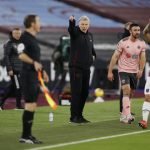 With reports back in February suggesting that the winger could be on his way out of West Ham this summer, and with Ex claiming that some clubs have been looking at him from abroad, it seems that a potential exit could well be on the cards for Yarmolenko this summer.

In our view, with Yarmolenko currently being West Ham’s highest earner – racking up a reported weekly wage of £115k per week according to Spotrac – perhaps offloading him this summer would be the best option for the club so they can use the money from his wages elsewhere.

In other news: ‘From what I’m told’ – Insider reveals big potential transfer blow at West Ham