Colley appeared on the latest video of The Villa Generals Podcast, and one topic of discussion was the club’s chase of Smith Rowe this summer.

Villa’s second bid for Smith Rowe has been rejected, but it has been suggested that the club haven’t given up on the chase for the midfielder. The second bid was thought to be around a value of £30 million. 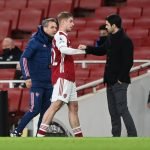 Colley talked about Smith Rowe, claiming that a third bid will be made and a transfer could be ‘massive’ for Dean Smith’s men.

He stated: “I don’t cover Villa now day to day like I used to, but I still speak to the lads that cover the beat. As far as I can see, there’s a third bid going to go in.

“The big thing is, it’ll be massive for Villa, but it’ll get reported as bigger for Arsenal losing him. This is a kid who’s gone through their academy, moved to north London when he was ten from east London. His whole family uprooted, he’s gone through the academy system, and to sell him – this is the sort of thing managers walk out for.”

It shows that he’s certainly a reliable creative player, but this is a midfielder who has played fewer than 50 senior games for his club and is not yet a senior international. So paying over the odds for Smith Rowe might be risky business for Villa, who already have a fair few options in the positions that the 20-year-old can play in.