Celtic podcaster Barry Degning has been sharing his thoughts on Hoops goalkeeper Vasilis Barkas and his future at the club under new manager Ange Postecoglou.

This comes after Degning made an appearance on a recent episode of Celtic-themed podcast A Celtic State of Mind, where he spoke about a range of topics concerning the Parkhead side.

On the subject of Celtic’s current goalkeepers and who he thinks will be the number-one choice next season under Postecoglou, Degning had this to say on the matter and Barkas in particular.

He said: “It really depends on Ange. Neil Lennon didn’t seem to have an idea who he was playing and who he wasn’t playing – who he was told to play, probably. So, we don’t really know who Ange sees as first-choice.

“My feeling would be Barkas just because I think he fits the description of the ‘keepers Postecoglou likes.”

Celtic signed Barkas back in the previous summer transfer window from Greek club AEK Athens for a fee of £4.5 million.

Since then, the 27-year-old, who is currently valued at £3.6 million, has made 22 appearances for the club in which he has managed to keep 11 clean sheets in the process (per Transfermarkt).

With Barkas making 13 appearances for Celtic in the SPFL in 2020/21 and Scott Bain making 15, this suggests to us that it wasn’t clear who the club’s first-choice goalkeeper was, which makes it understandable why the question of who will be their number-one choice will be next season has arisen ahead of Postecoglou’s reign.

Who do you think should be Celtic's first choice goalkeeper next season? 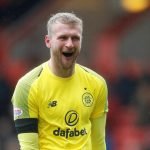 As well as Barkas and Bain, Conor Hazard also had some time in goal for Celtic this season, making five league appearances.

In our view, now that Postecoglou has been appointed as the club’s permanent manager, one of his priorities should be to identify who he wants to be Celtic’s first-choice goalkeeper for next season so that there is some sort of consistency in the team, which clearly wasn’t apparent this past year.

In other news: ‘In terms of our info’ – Sky journalist breaks silence on Maloney to Celtic rumours