The Athletic’s Southampton correspondent Dan Sheldon has featured on the latest edition of the Total Saints podcast to give his thoughts on the speculation surrounding Martin Semmens’ future.

According to journalist Alex Crook, the Southampton CEO, Semmens, is admired by Manchester United in their search to replace Ed Woodward.

Will Semmens leave for Man Utd this summer? 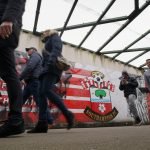 The Manchester United man walked away from the club last month following the controversy surrounding the proposed European Super League. Despite the claimed interest, Sheldon gave his thoughts after reading the speculation and admitted he does not believe the Saints will lose their man given his ‘commitment’ to the south coast side.

He said (36:35): “I was surprised and I wasn’t surprised when I saw it. I thought, oh, that’s interesting. You don’t normally hear of chief execs moving around. It’s not the kind of like thing you wake up and read about. And then when you think about it, why wouldn’t they be interested in a guy like him?

“But then when you spend like a bit longer thinking about it, you just think well, he is incredibly committed to Saints. He has a brilliant relationship with Ralph [Hasenhuttl] as I mentioned, and I’m not sure, I think he’s happy at St. Mary’s.”

Although Sheldon is not completely ruling out the possibility of losing the Saints man, he does seem pretty confident Semmens is invested in his future at St. Mary’s. However, it will be interesting to see how this rumoured interest pans out as it is a big ask for someone not to be interested when a club the size of Manchester United comes calling.

With just five games remaining for Ralph Hasenhuttl’s side in the 2020/21 campaign, it will be interesting to see how the rest of the campaign shapes what the next one is going to look like.