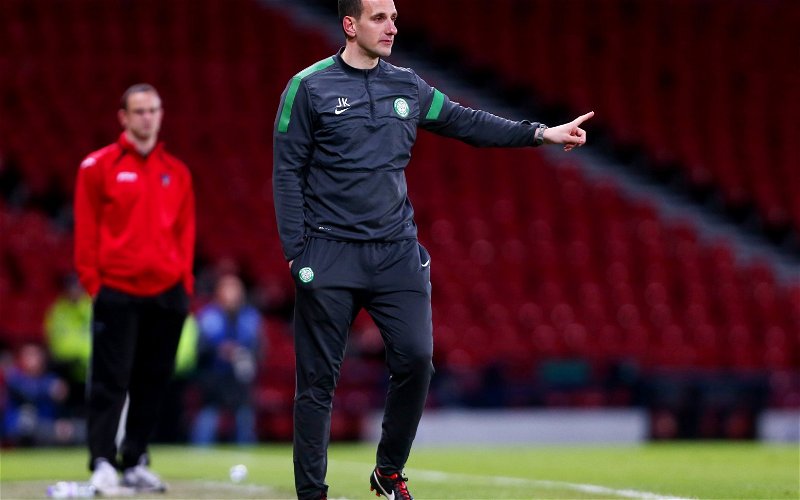 Lots of Celtic fans have vented their anger on Twitter at the latest comments to surface from John Kennedy ahead of their Old Firm derby clash on Sunday.

The Bhoys travel across Glasgow to Ibrox on Sunday as they aim to avoid a fourth defeat of the season to their bitter rivals in what will be their fifth meeting across all competitions this campaign.

Ahead of the game, interim manager John Kennedy spoke to the media and provided an injury update.

He said: “James has trained all week. He’s been good. Mikey’s trained this week so we’ve got a better squad in terms of options going into the game.”

However, the Hoops fans did not take kindly to what he had to say with many questioning whether the return of certain players would in fact help them in their derby clash.

“Guaranteed loss for us then”

@scottris88
“Advantage rangers”
@Jozo_67
“But we’ve still got the same manager and his sidekicks, I again fear the worse but as always hope for the best, “
@RhabP
“All bark, no bite.”
@DueGreetin
“One up front …”
@jasonpl
“No reason to have no wingers on the bench like we have for 90% of the season then”
@hotbaws1
The Bhoys have nothing more than pride to play for on the weekend given they have already secured second spot in the Scottish Premiership following their emphatic 6-0 victory over Livingston the other week.

Going by the reaction of these Celtic fans it is apparent they are far from impressed by the latest hint at team selection from Kennedy with some also questioning his management skills ahead of the derby clash.

In other news: ‘Nooooo’, ‘Really?’ – Lots of Celtic fans fume as news emerges