This comes after Delaney co-hosted a recent episode of The Athletic’s West Ham-themed podcast U Irons, where he spoke about a range of topics concerning David Moyes’ side.

On the subject of Benrahma, who scored West Ham’s equaliser during their recent 1-1 draw against Brighton & Hove Albion, Delaney had this to say about the winger ahead of their clash against the Baggies.

He said: “You look at the Everton and Chelsea games and the way in which teams have set up against us. They’re showing us a lot more respect, basically, and we are struggling at times to break down.

“That’s why I would say, against West Brom, we need to start with Benrahma, because Benrahma has had his best games against the teams who are below us towards the bottom of the table where sometimes there’s a little bit more space.

“You need a player like him because you know if they’re really parking the bus, you need someone who might be able to unlock them with a trick or you know, a shot from range like the one he scored with [against Brighton].”

West Ham originally signed Benrahma back in October on a loan deal from Brentford before securing him on a permanent deal in January for a fee of £20.79 million.

Overall, the 25-year-old, who is currently valued at £19.8 million, has made 31 appearances for the east London club in which he has managed to score just one goal and provide six assists in the process (per Transfermarkt).

Given how Benrahma managed to score his first goal for the club against Brighton and rescue a point for the Hammers in the process, it would be understandable if Moyes rewarded the winger with a start against West Brom. 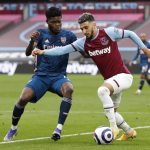 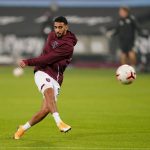 However, in our view, taking into account how the Algerian has only managed to rack up an overall season rating of 6.56/10 for his performances in the league, this doesn’t justify a starting place for the winger against West Brom – although the majority of his appearances have been from the bench.

Moving forward, if Benrahma does play a part in any of West Ham’s remaining games this season, he may have to have a more significant impact to ensure his debut season in the Premier League ends on a high note.

In other news: ‘He said that’ – Ex drops big Jesse Lingard transfer claim at West Ham