Jonjo Shelvey has often divided opinion during his time at Newcastle United but despite being a regular under Steve Bruce, he could be set for a summer exit according to Steve Howey, who made 157 appearances for the Magpies.

Shelvey was one of four signings made by Steve McClaren in January 2016 as the club hurtled towards an eventual second relegation under Mike Ashley, but the former England international has been an almost mainstay having made 172 appearances, the most for any club during his career. 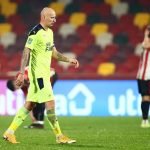 Bruce has played Shelvey in 30 out of the 38 Premier League games this season which has seen him achieve a WhoScored rating of 6.80, and the midfielder even came out and defended himself against a fan who called him lazy earlier this year.

The former Liverpool midfielder has often been linked with a move back down to London and joining West ham, however, that appears unlikely now given how well the Hammers have performed this season, but Howey would not be surprised to see the 29-year old leave this summer, telling This is Futbol:

“Well, there’s every chance that he could leave because like I’ve said, in football, you just never know what’s going to happen as it always surprises you.

“Anything can happen really so it wouldn’t surprise me. I think the best thing about football is that always surprises you.”

Steve Bruce is well stocked up in the centre of midfield with the likes of Shelvey, Sean Longstaff, Isaac Hayden and Jeff Hendrick all featuring regularly this season.

If Newcastle were to sign star loan signing Joe Willock permanently, then Bruce may feel like he can’t guarantee game time to all of his midfielders and with Shelvey being there the longest and on the highest salary, £70,000 per week, he could be moved on.