If Tottenham sell Harry Kane this summer, they’re going to have to sign a number of players to replace his goals, and Marcus Bent believes that Wilfried Zaha would be a good start.

The north London giants are yet to name a replacement manager for Jose Mourinho, but reports believe that both Spurs and Everton are keen on signing the talented Crystal Palace attacker. 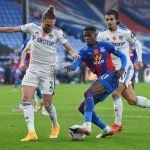 Zaha is linked away from Palace almost every year, but with just two years remaining on his Selhurst Park contract, the 28-year-old could now be available at a cut-price of just £40m, far less than the figure that was touted two years ago when he was strongly linked with a move to Goodison Park.

Tottenham are likely to have funds available with Kane expected to leave for a significant fee, whilst Gareth Bale isn’t guaranteed to return next season, which could open a space for Zaha in their front three.

Zaha, who ex-Spurs boss Mauricio Pochettino was reported to be a long-term admirer of back on 2017, enjoyed another impressive season for Palace, scoring 11 times, his best Premier League return, whilst laying on two assists in 30 appearances to help his side to safety.

He’s approaching 400 appearances for the club but he might have played his final game in an Eagles shirt.

When asked whether Zaha would be a good addition for Spurs, Bent exclusively told This is Futbol:

“I’d like to think so, he’s a talented player. As we’ve said, Spurs are in such a predicament, bringing a player like him in, would that give the fans belief?

“The fans are looking for a bit more input and maturity and players that are more well known.”