Robbie Earle thinks that it is highly likely West Bromwich Albion midfielder Matheus Pereira will leave the club this summer after his performances this season.

The Brazilian playmaker, valued at £11.7m on Transfermarkt, has certainly been the Baggies’ most influential player this season, scoring 10 goals and chipping in with six assists, which has been good enough to earn him a WhoScored rating of 6.94 for the season so far.

Despite his respectable numbers this season, the Baggies have had their future in the Premier League cut with a return to the Championship waiting for them at the end of the campaign.

But it looks as if the Premier League, or at the very least the top flight in some country, will be where Pereira ends up according to Earle, as speaking on the 2 Robbies Podcast (13:59), he thinks that clubs from around the world are likely going to show an interest in him and he won’t be playing in the second tier:

“I would be surprised if he’s in the Championship Rob, I would just be surprised. Whether it’s English clubs or clubs from abroad, the Premier League goes all around the world.

“You’ve seen his 10 Premier League goals now, I think Saido Berahino and Romelu Lukaku are the last West Brom players to hit double figures in the Premier League so he’s in good company.

Will West Brom make at least £15m off Pereira this summer? 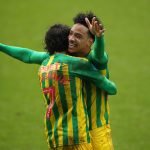 After the display he has put on this season, it is no surprise to read that there are a number of clubs who are after him, and it could take something significant and substantial for them to keep him at this rate.

The best that West Brom can hope for right now is that a bidding war starts between the clubs that have shown an interest so that they can get as much for him as possible to help fund their promotion challenge out of the Championship.

And who knows, that extra £1m or so that they can squeeze from the club that gets him could end up making a massive difference to what the squad looks like next season.

In other news: ‘The vibe I’m getting’ – Journalist drops worrying financial claim at West Brom