Sheffield Wednesday striker Steven Fletcher continues his rehabilitation from a knee injury he sustained during the club’s FA Cup third-round victory over Brighton and Hove Albion. Whilst it was a great result for Garry Monk’s side, the day was somewhat overshadowed by the injury to the Owls’ Scottish centre-forward.

Following the release of an image of the 32-year-old on the training pitch, these supporters have taken to social media to express their excitement.

Can Steven Fletcher save SWFC's season? 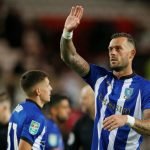 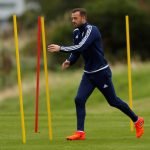 Need him back ASAP

Can’t wait to see him back fit…

Steven Fletcher’s absence has significantly weakened Garry Monk’s side, who have just one win in their last seven Championship fixtures.  They are currently second from bottom in the league’s form table, just above Luton Town who sit 24th in the division.

Prior to his injury, the former Wolverhampton Wanderers and Sunderland striker had scored 12 goals in 22 league appearances this season.  Having fallen seven points outside the play-off positions, these supporters seem keen to see him return to action soon.