Celtic: Some Hoops fans fume at performance of Lewis Morgan against Cluj

Some Celtic fans have expressed their unhappiness with the performance of striker Lewis Morgan in their recent 2-0 loss to Cluj in the group stages of the UEFA Europa League.

The Hoops lost the second game of the season in all competitions on Thursday and because of that, failed to finish the group stages of the competition on an unbeaten note. Despite that, they have finished top of the group for the first time in history.

Celtic fans: Does Lewis Morgan have a future at the club? 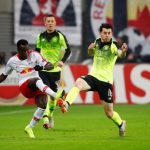 He does have a future here 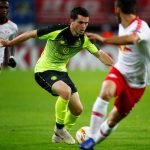 Neil Lennon fielded a rather changed line-up in Romania and it saw Lewis Morgan start once again upfront. Some Celtic fans are not happy at all with the performances of the forward and are desperate to see him go.

Positive is Lewis Morgan must be sold ASAP

Sorry but lewis morgan shouldnt b anywhere bear a celtic team…way out his depth..loan him out cause plain & simple.hes no good enough..a hibs or aberdeen aye.done wonders for christie

Lewis Morgan will never be a Celtic player.. absolutely rotten and I honestly couldn’t name one strength of his

The forward has seen regular game-time in recent weeks due to the fitness issues faced by Odsonne Edouard and Leight Griffiths’ slow comeback to action.

This season, he has played 18 times in all competitions and has scored twice so far, racking up a tally of three assists as well. He has started the club’s last two Premiership games but was taken off before full-time against Ross County and Hamilton. He also started in the recent League Cup final but was taken off for Edouard himself.

Last season, Morgan was loaned out to League One side Sunderland and played 22 times in all competitions for the Black Cats. He found the back of the twice and racked up twice too.

Celtic have enough options for the striker position, now that Griffiths is slowly getting back to full fitness. And Edouard will soon be without injury issues. Morgan is unlikely to get enough game-time when both of them are in full fitness. A loan deal away from Celtic will make sense for him.