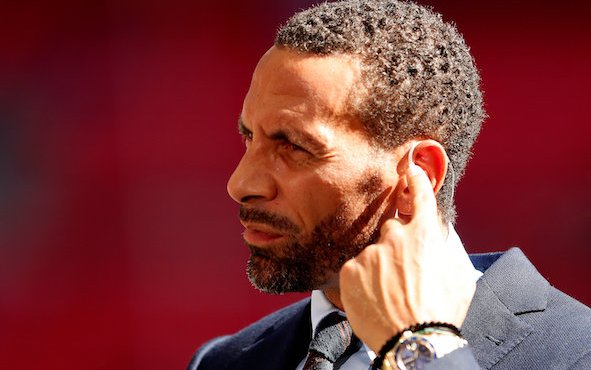 Rio Ferdinand has destroyed Virgil van Dijk for his “criminal” defending in the build-up to Barcelona’s opening goal against Liverpool at the Nou Camp on Wednesday night.

Luis Suarez scored against his former club after a well-placed low cross into the box by Jordi Alba.

And while it was a superb example of predatory striker instincts by Suarez, Manchester United legend Ferdinand has pointed out that player of the season van Dijk let Liverpool down in the goal and should have done better.

“Virgil van Dijk here, he’s at fault,” Ferdinand said at half-time of the match on BT Sport 2 on Wednesday night [08:56pm]. “He can see Suarez there, he’s pointing where he wants it. It’s not rocket science.

“He’s right in front of him, that’s your man with the number nine on the back of his shirt.

“Virgil van Dijk there is static. That’s criminal in that position. He’s got to be [Joel] Matip’s eyes and ears, move Matip where you want him to maybe stop the ball in the first instance, but if not, you have to go with your man there.

“He will be disappointed with that.”

Ferdinand is right because van Dijk should have done a lot better to stop Suarez from scoring. The Netherlands international looked like a statue when the ball was played into the box by Alba and as Ferdinand pointed out, he should have at least shouting something at Matip in a bid to get him to help him out. Although van Dijk might have stood a chance at stopping Suarez if he wasn’t caught so flat-footed by the Barca attack, you have to take your hat off to Suarez and applaud a magnificent piece of play. Alba’s ball in was inch-perfect and Suarez’s run was also timed to perfection. Van Dijk is seen as the best centre-back in the world and if he struggled to cope with the pace and the ruthlessness of that attack, would anyone else be able to? Ex-Man United star Ferdinand clearly thinks he could have done better.