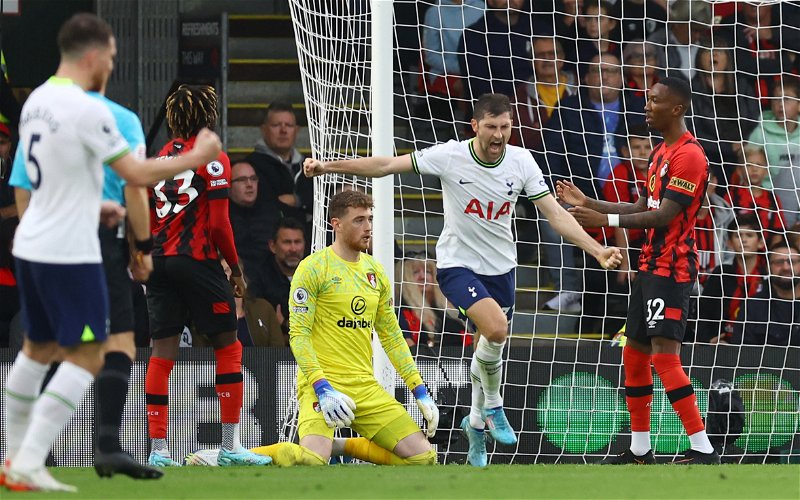 Tottenham Hotspur left-back Ben Davies has been criticised for a below-par performance in the side’s 2-1 Champions League victory at Marseille.

Football.London journalist Alasdair Gold was evaluating the player’s performance in his post-match ratings.

Davies played at left-back during the side’s performance at Marseille, in which Antonio Conte’s side secured the top spot in their Champions League group, meaning that the Lilywhites have progressed to the knockout stages of the competition.

However, the 74-time Wales defender was part of a sloppy first-half performance in which Spurs found themselves 1-0 down at half-time.

And Gold was critical of Davies’ display, despite goals from Clement Lenglet and Pierre-Emile Højbjerg securing victory for the north London side.

Gold wrote: “Sent a couple of sloppy passes to Marseille in his own half towards the end of the first period.

“Improved in the second half with the team but like Dier, he could have proved costly in the first half.”

We think that Gold has got a point, with the defender proving a relatively ineffective presence in an attacking sense for the Tottenham side this evening.

According to SofaScore, the 29-year-old produced zero crosses or attempts at goal, suggesting that the Welshman put in a sub-par display when going forward for Conte’s side.

In a defensive sense, however, the stats suggest that he was relatively solid having only lost possession six times throughout the game, whilst not being dribbled past and winning all three of his duels.

Therefore, we think that whilst Davies may not have been particularly useful in an attacking sense, a solid display at the back in general suggests that Gold may have been a tad harsh in his review of his performance.

However, given how high the stakes were last night, one lapse of concentration could have led to disaster for Spurs, and on another day, Davies could have been guilty of being responsible for their Champions League exit.