Over the summer, the Whites lost one of their key players as they sold Kalvin Phillips for a basic fee of £42m, with a potential further £3m to be added in bonuses.

Having seen the England international depart, Leeds faced a tough task in replacing the central midfielder and opted to sign Roca to fill the gap as he arrived from Bayern Munich for just £10m.

While speaking about this deal on the One Leeds Fan Channel, McGilligan said that given his start in a Leeds shirt, it was a ‘phenomenal’ move from Orta to land the Spaniard as his distribution is on par with Phillips’, while he also credited the Whites’ director of football for adding Tyler Adams to the mix.

The journalist explained: “Snipping him up for £10m is definitely a huge tick for Victor Orta. Because I think his distribution is on par with Kalvin’s. I think he’s able to move the ball longer, quicker than Kalvin did.

“I think in terms of his distribution, we have replaced Kalvin Phillips exceptionally well when it comes to Marc Roca.

“Now, when you look at the overall package that is Kalvin Phillips, I think Victor Orta has done a phenomenal job. A phenomenal job in replacing him with these two.” 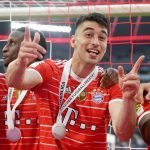 All McGilligan mentions, the club also spent some of their budget (a fee in the region of £20m) on Adams, who has since played every Premier League game for the side so far this season.

The same can be said about Roca, who has partnered him in the middle of the park for all those games, and it seems to be working fairly well, with Leeds ninth in the league as things stand.

What’s more, when you look at his stats on FBref, you can see the midfielder is in the 99th percentile for progressive passes (with 7.20 per game) over the past year, while Phillips is only at the 60th (with 4.28), so this proves the new Leeds man certainly is pretty good with his distribution and justifies McGilligan’s praise.