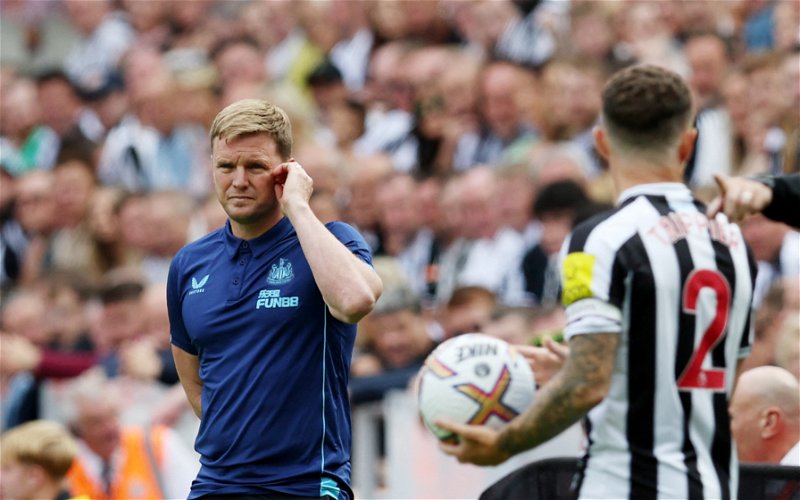 Newcastle United never really proved a threat during the week against Liverpool and Paul Merson believes Eddie Howe’s side will draw against Crystal Palace later today.

The Sky Sports pundit has been writing in his latest column for Sportskeeda to preview this weekend’s Premier League action including the game at St. James’ Park.

Howe’s side saw their hard work undone on Wednesday night at Anfield with Liverpool stealing the points late on with a winning goal in the dying seconds of the game.

But it was the Magpies who took the lead on Merseyside with their latest addition, Alexander Isak, providing them with the advantage before then seeing another goal ruled out for offside.

Yet Merson does not believe the Toon provided much of a threat to Jurgen Klopp’s side and has them down for a 1-1 draw at home to the Eagles who blew their own lead on Tuesday night:

We were seriously impressed with the Toon on Wednesday night given they came so close to taking something away from Anfield with such a depleted side.

Do you expect NUFC to beat Palace today?

Going into the game the Toon were definitely up against it with their injury issues and to almost take a two-goal lead, we think should be commended.

Howe’s men did only manage five shots throughout the game, however, we would disagree with the comment on them not being a threat with Isak clearly causing the Reds’ backline some serious issues.

If they can show the same fight today then they should not have too many issues against Patrick Vieira’s men who have already conceded nine goals in their opening five games.

And if they do receive a late injury boost with the likes of Allan Saint-Maximin and Bruno Guimaraes returning then it could make for a promising afternoon on Tyneside for Howe’s side.