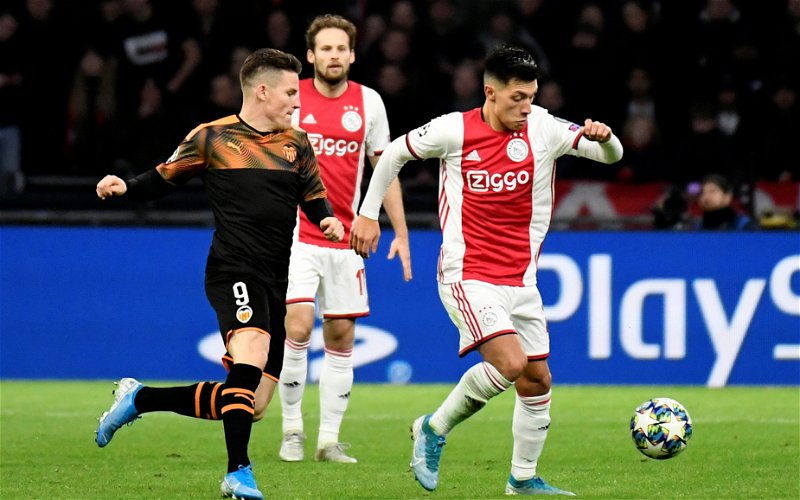 Amid the news that Arsenal have submitted a third bid for the Ajax man, van der Kraan has been waxing lyrical about Martinez’s playing style and it could be something that is lacking at the Emirates Stadium at present.

The report from The Sun detailing their latest approach revealed that the Amsterdam club had turned down their initial offer of £26m before rejecting a further attempt of £34m with the Dutch champions thought to be holding out for an offer in the region of £43m.

The versatile Argentinian is thought to be on the shortlist of his former manager Erik ten Hag at Manchester United (The Times) having featured at centre-back most prominently, but also at left-back and defensive midfield.

Now van der Kraan has hinted at a position where the 24-year-old could slot straight into in Mikel Arteta’s side at north London.

(55:42)”That is a player with probably the biggest amount of venom I would call it on the pitch. He’s got that little bit of Argentinian street-kid poison.

“You need in big matches one or two tough guys and that is what Lisandro Martinez is for you.

“Not the biggest of guys but oh my God can he go into a battle and I think Arsenal fans can look forward to somebody who’s got the right spirit and attitude to stand up in the big games as small as he is.

TIF Thoughts on Martinez and Arsenal…

Indeed at 5 ft 9 he is by no means the tallest but the seven-cap Argentina dynamo could  bring that backbone to the Emirates that has previously been missing at the club.

With Thomas Partey’s injury troubles, Arteta may choose to use Martinez at the base of that midfield and he certainly plays with the ‘venom’ that van der Kraan mentioned.

He is compared to Antonio Rudiger, formerly of Chelsea, due to his playing style (FBRef) and his robust approach.

Last season he made an average of 3.9 tackles and interceptions per game (SofaScore) twice as much as Partey in both regards and substantially higher than any current player at Arsenal so bringing in the man dubbed ‘the butcher of Amsterdam’ is perhaps certainly one worth chasing.