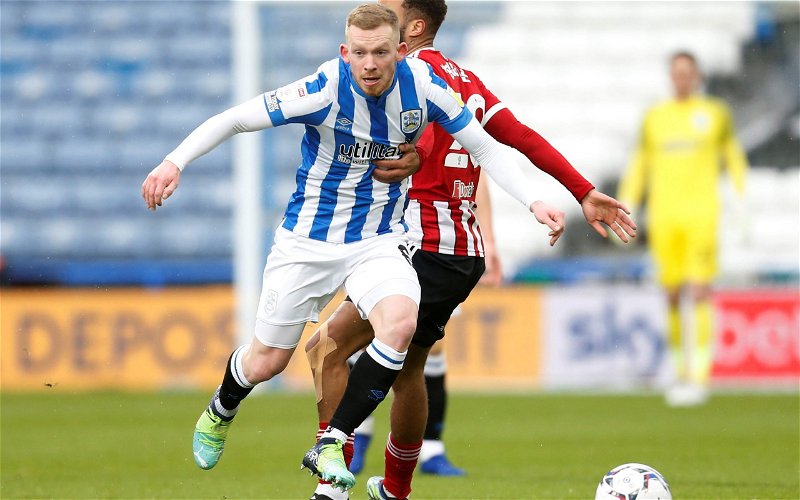 Journalist Conor McGilligan has claimed that Leeds United transfer target Lewis O’Brien, who they failed to get in January for £10m, is better than crucial starting players already.

Leeds struggled with fitness during the past season, with injuries to a number of key players including Patrick Bamford, Kalvin Phillips, Adam Forshaw and Luke Ayling resulting in the Yorkshire team battling for their Premier League lives with a thin squad.

Despite having a number of long-term injuries, the Leeds brass failed to bolster the squad in the January transfer window despite being linked to the aforementioned O’Brien and new summer signing Brenden Aaronson, leaving manager Jesse Marsch with a mountain to climb in order to secure their top-flight status, which came down to the final day.

It would now appear that Leeds are looking to sign a number of players in the summer, including O’Brien, who has impressed at Huddersfield Town in the Championship.

And McGilligan feels the potential signing is already superior to several members of the Leeds starting squad.

He said on his One Leeds Fan Channel on YouTube: “You look at Lewis O’Brien, there was an option there for Leeds to spend £8-10m. Allegedly, the club said no. Let’s be brutally honest, here – Lewis O’Brien is better than [Mateusz] Klich, he’s better than Forshaw, he’s a better footballer, he’s 23 years old.

“So Leeds are probably, in this window, going to go and buy Lewis O’Brien and maybe come back and say, ‘oh, well, you needed those minutes and experience in the Championship’. But really, they could have got Lewis O’Brien in January.”

The Whites desperately need to add numbers to their squad, and in doing so, need to make sure they can secure deals wherever possible. Signing O’Brien could be one of these deals, given they were linked with a £10m swoop in January.

The central midfielder, who has been hailed as ‘exceptional’ by Carlos Corberan, impressed during his season with Huddersfield as they stormed to the Championship play-off final where they narrowly lost to Nottingham Forest.

Throughout the season, he racked up three goals and three assists while averaging an impressive 2.2 tackles, 1.1 shots, one key pass, two dribbles, 0.8 interceptions, 0.9 clearances and 1.7 long balls per game, along with a 78.5% passing accuracy (as per WhoScored).

We believe making a move for O’Brien would be a great piece of business for Leeds as they need improvements in squad depth, while there have been rumours surrounding the possible exit for star man Phillips, which would open up a starting place for the 23-year-old.