Newcastle United supporters will be left stunned after seeing youth talent Tom Allan score an incredible goal for the club’s academy side.

Earlier this week, the Magpies U23 team took on Aston Villa in their final Premier League 2 game of the season. The match ended 2-1 to Newcastle, with Tom Allan opening the scoring before Kadan Young levelled the scores, only for Adam Wilson to net the winner.

Will Tom Allan get a chance at senior level next season with NUFC?

However, it was Allan’s strike that truly caught the eye as he managed to score from almost the half way line with an incredible long-distance lob.

The footage was shared on Twitter by NUFC360 and it’s fair to say supports will view the goal as an effort to remember. 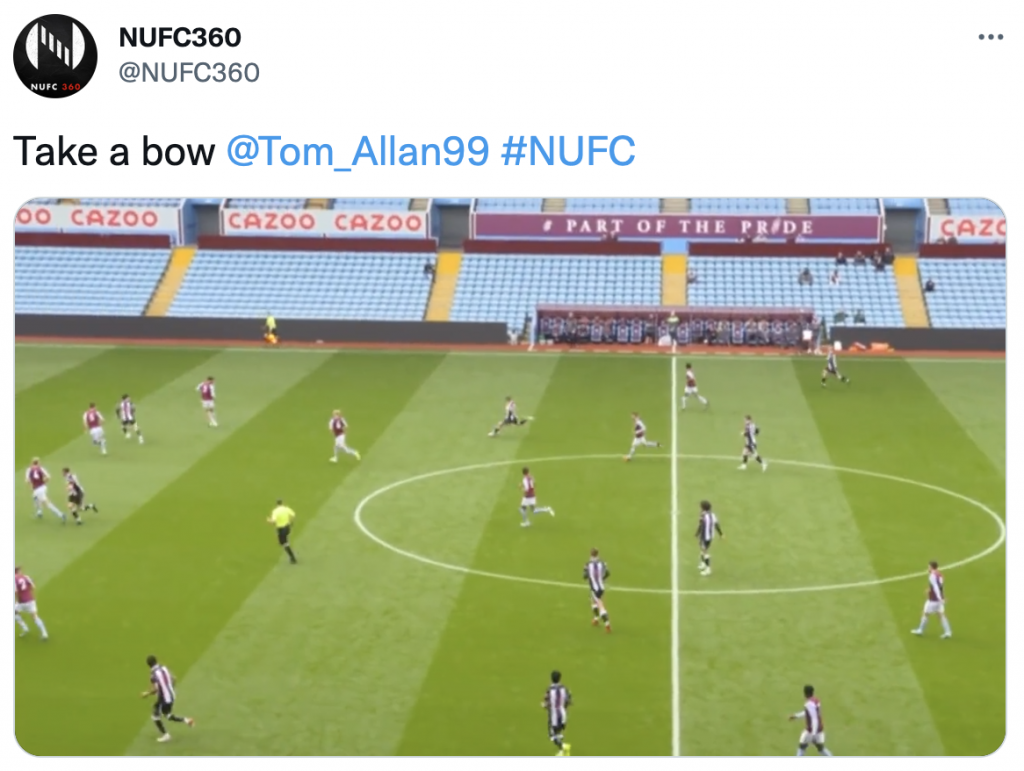 Of course, with all the buzz about Elliot Anderson at Bristol Rovers, perhaps now fans have another player to keep an eye on. Especially as he has been highly rated at Newcastle for a couple of years now.

The 22-year-old has played six times in that division this season but that was his first strike – and in fact his first goal this term in all competitions (via Transfermarkt). Such was the quality of the effort, it was probably worth the wait.

Indeed, that strike with bring back memories of the similar goal Xabi Alonso scored against the Toon all the way back in 2006 for Liverpool.

Having spent part of the campaign out on loan in the Scottish Championship with Morton, Allan will likely hope to kick on next season and make an impression in the senior Newcastle team.

He has actually made his first team debut – in the FA Cup against Rochdale, in January 2020, where he claimed an assist for Joelinton’s goal – and more efforts like this could have him on Eddie Howe’s radar in the future.

In other news: Senior NUFC man may have played last game as Eddie Howe lines up replacement – opinion