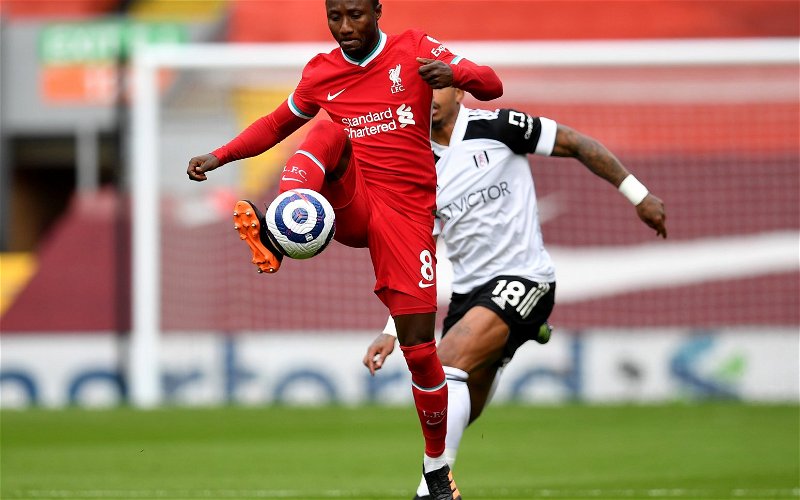 Liverpool journalist Matt Addison has given his thoughts on Naby Keita and his future at the club following recent reports.

According to a report in the Spanish press, the Guinean’s future at the club is in serious doubt, as they claim that Liverpool boss Jürgen Klopp has “ordered him to begin to look for a new team”.

Liverpool bought Keita for what was a club-record £48m in 2017, and since then, he has gone on to make 92 appearances, scoring 10 goals and chipping in with five assists. His spell at the club, however, has been dominated by a catastrophic run of injuries that have kept him out of the side on numerous occasions.

Speaking on a recent edition of The Agenda from Blood Red, Addison discussed Keita’s situation, the complexities behind the reported decision, what Liverpool might be doing moving forward and how the player himself might not get much of a say over his Anfield future:

“So I think it will probably just be a case of, is it him that goes this summer, is it maybe Alex Oxlade- Chamberlain, is it one of the others? I don’t think they’ll be losing more than one of those midfielders because they just can’t really afford to.

“So in some respects, I think Naby Keita’s future is kind of with one hand tied behind his back, I don’t think there’ll be a great deal of choice about it. It’ll be a case of what suits Liverpool the best come the summer – it certainly won’t be in January.”

Do you think Liverpool should sell Keita?

No, give him a bit longer

Yes, he has failed

If Keita does leave, there reportedly won’t be a shortage of suitors, as the earlier report claims that Barcelona, Bayern Munich, West Ham United, Milan and Roma are all supposedly taking an interest in his services, with Liverpool setting an asking price of €30m (£25m).

But as Addison points out, given Liverpool’s squad situation at the moment when it comes to injuries and other health issues, it wouldn’t make a lot of sense for the club to let him go this window.

Whilst Keita might not be the most reliable option, it would be foolish of the club to let him go when they need all the help that they can get.

Given his availability issue, it would be best for Liverpool to just cut their losses and take what they can for him to invest in someone more trustworthy, but they would be better off leaving it until the summer.