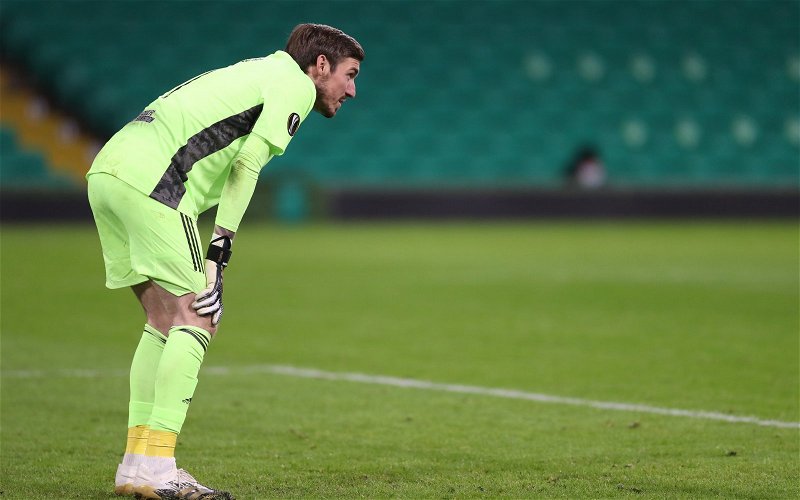 Presenter Paul John Dykes has claimed that Celtic defender Stephen Welsh didn’t have the confidence to pass the ball back to goalkeeper Vasilis Barkas in a recent match.

On Boxing Day, the Bhoys claimed a strong 3-1 victory at the weekend in the Scottish Premier League thanks to Liel Abada’s first-half double and Nir Bitton’s late strike.

In the game against St. Johnstone, Barkas was afforded a rare start with Joe Hart out injured. Indeed, this was just the 27-year-old’s second appearance of the season and his first in the league.

While speaking on A Celtic State of Mind podcast, Dykes explained that an incident between the ‘keeper and Welsh suggested a ‘lack of confidence’ in Barkas from his teammate.

He said: “There was a point where Stephen Welsh gets the ball, he’s facing his goalkeeper, but he tries to twist and turn to kick the ball back up the park, it ends up going out of the park.

“And because there was virtually no one in the stadium – you could hear quite a bit of Postecoglou on the sidelines, you could hear the players, etc – and someone is shouting at him to say you should have passed that back.

“And [Welsh] says: ‘I’m not going there.’ And I just felt it showed a wee bit a lack of confidence, which is understandable when you consider the career that Barkas has had.”

Judging by the fact that Barkas has played just twice all season, it seems as if manager Ange Postecoglou doesn’t have a great deal of faith in the goalkeeper.

To be fair to Postecoglou, Welsh, or anyone else, it’s not as though the 27-year-old goalkeeper has been a model of consistency when given a shot in goal, either.

In fact, earlier on in the campaign, in a game against FC Midtjylland, Barkas put in a display which was described as a ‘horror show’ by the Daily Record after misjudging a free-kick which led to a goal in a 1-1 draw.

After that, Postecoglou dropped the shot-stopper right up until this match against St. Johnstone, where the injury to Hart allowed him back into the team, so perhaps he is only being used as a last resort at present.