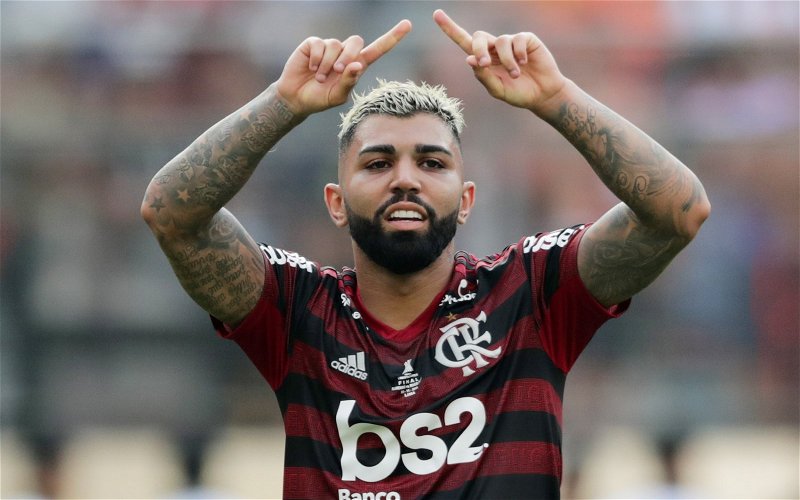 A whole host of Newcastle United fans on Twitter are buzzing to see their club linked with a move for Gabriel Barbosa.

It appears to be the general consensus that Newcastle must adjust their transfer strategy for January following the injury to Callum Wilson – which is expected to keep him sidelined for months, according to Craig Hope.

Newcastle will need to bring in a striker who is good enough for the Premier League and can take on the burden Wilson has carried so well since arriving on Tyneside, but that would likely cost a whole load of money, especially with clubs knowing Newcastle have plenty of funds.

Therefore, they could well look away from the domestic league, with Portuguese journalist Alfonso Leocadio claiming that Flamengo’s Barbosa is someone to ‘keep an eye on’ – while a separate claim has also been made by The Mirror.

A lot of Newcastle fans on Twitter are delighted to be linked with Barbosa.

“A signing I could really get behind, didn’t seem to work out at Inter Milan but surely he might have a point to prove in Europe? The quoted price doesn’t seem too risky. More of an inside forward and not cover for Wilson. Would really improve us in the final 3rd.”

Barbosa has already tried his luck in Europe with both Inter and Benfica, but neither of those spells were successful, having scored just two goals across 15 appearances for both clubs combined, but if Newcastle could bring him in on loan, it could be a risk-free move.

in other news: ‘I’ve spoken to them’ – Luke Edwards drops promising PIF claim at Newcastle